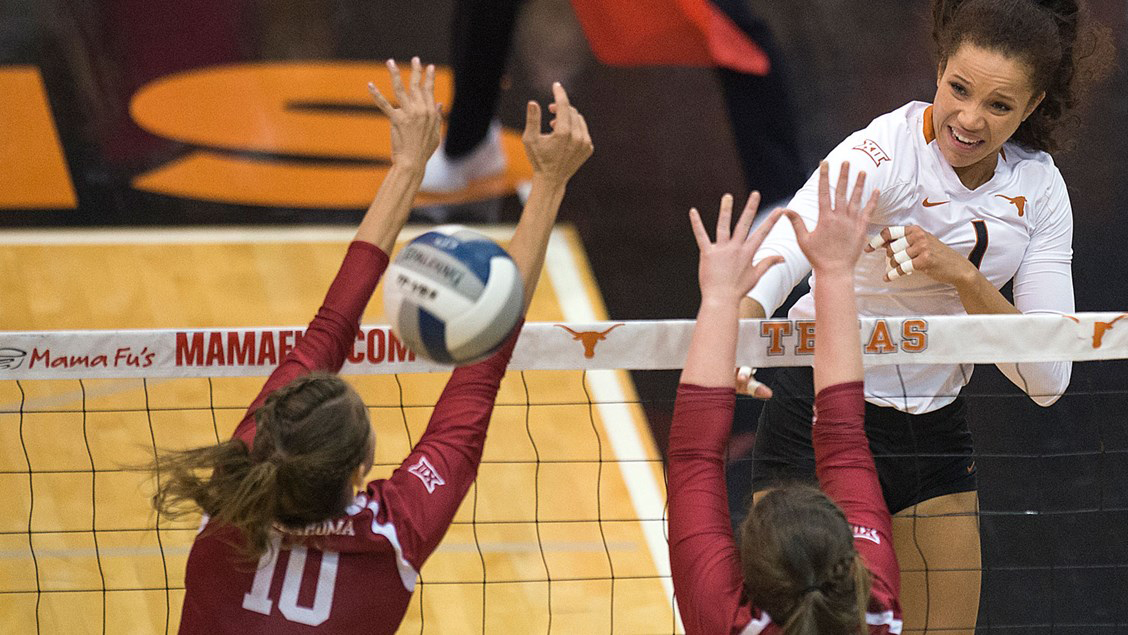 Micaya White has registered double-digit kills in each of the Longhorns' first four matches in the 2018 season (photo courtesy of texassports.com).

The marquee match of the tournament was the clash between the Longhorns and Badgers. Freshman outside hitter Logan Eggleston and junior Micaya White each hammered 16 kills to pace the offense; for Eggleston the total was a career high. White also notched her second double-double of the season with 11 digs.

Freshman libero Sydney Peterson led the Texas defense with 14 digs, marking the third straight match in which she has collected at least 10, while Autumn Rounsaville added nine. Sophomore Ashley Shook notched a team-high 45 assists, to go along with five digs and a pair of blocks.

Despite the loss, UT enjoys an exceptional record against top opponents. Over the last 12 seasons, the Longhorns have a .686 winning percentage (107-49) against ranked teams.

Freshman middle blocker Brionne Butler led the Longhorns’ rout of High Point with 12 kills and seven blocks; White added 10 kills, the fourth time in as many matches that she has accumulated 10 or more, plus five digs, four blocks and one ace.

What separated the teams the most was defense. Molly Livingston had the only block in the match for High Point. By comparison, Butler had seven, Morgan Johnson had six and Yaazie Bedart-Ghani had five for the Longhorns.

Shook quarterbacked the offense with a match-high 30 assists.

The Longhorns will play at home for the first time this season this weekend, facing Texas State at 7 p.m. Thursday and then hosting No. 16 Kentucky at 8 p.m. Friday.