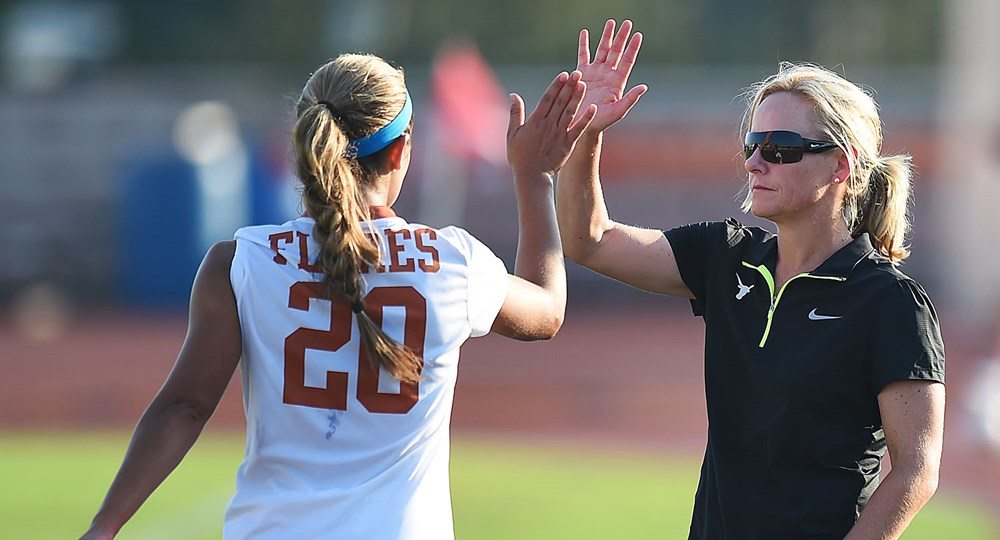 Forward Mikayla Flores, head coach Angela Kelly and the Texas Longhorns have been picked sixth for the second year in a row in a poll of the Big 12's women's soccer coaches (photo courtesy of texassports.com).

AUSTIN, Texas — The Texas Longhorns have been picked to finish sixth in the league’s annual preseason poll of women’s soccer coaches.

Four-time defending regular-season champion West Virginia was tabbed to retain its crown, collecting eight of nine first-place votes (coaches were not allowed to vote for their own teams). Texas Tech, which won the conference tournament, picked up the other first-place vote and was ranked second in the preseason poll.

Rounding out the top five were Oklahoma, Baylor and Oklahoma State. Trailing Texas in the preseason poll were Kansas, TCU and Iowa State.

The vote marks the second consecutive season in which the Longhorns have been picked to finish sixth; they exceeded those expectations last season by finishing third in the conference with a record of 8-6-4 — going 4-3-1 against Big 12 opponents — and reaching the quarterfinals of the Big 12 Championship.

The team also welcomes a signing class of 11 recruits in a class that was ranked the league’s top-ranked class, according to topdrawersoccer.com.

The Longhorns kick off the season at 7 p.m., Friday, Aug. 12 in a home exhibition match against Texas A&M-Corpus Christi at Mike A. Myers Stadium. The game will be broadcast live on the Longhorn Network. Admission and parking are free.