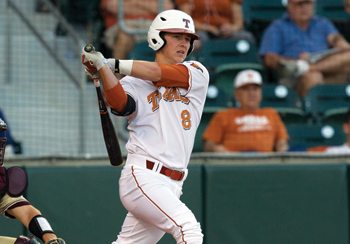 Brooks Marlow started his collegiate career with a bang. Unlike any other player in the 127 years of Longhorn baseball, the freshman second baseman clubbed a pair of home runs in his first two official at-bats this season. The feat pushed the Longhorns to a 4-0 victory in the opening game of a weather-provoked doubleheader against Duke Feb. 20. In the second game, Marlow propelled the team to a 3-2 lead when he sacrificed a fly ball to left field, allowing teammate Tim Maitland to score at the bottom of the second. The Longhorns won, 5-2.

“It doesn’t get any better than that, especially for a little second baseman,” senior third baseman Kevin Lusson chides.

The conference acknowledged Marlow’s record first-game effort by naming him the Phillips 66 Big 12 Newcomer of the Week. “Brooks’ start proved that good hitting isn’t about size or how much you can lift in…
The rest of this article is available to Digital Subscribers only. Login or Subscribe to continue reading.