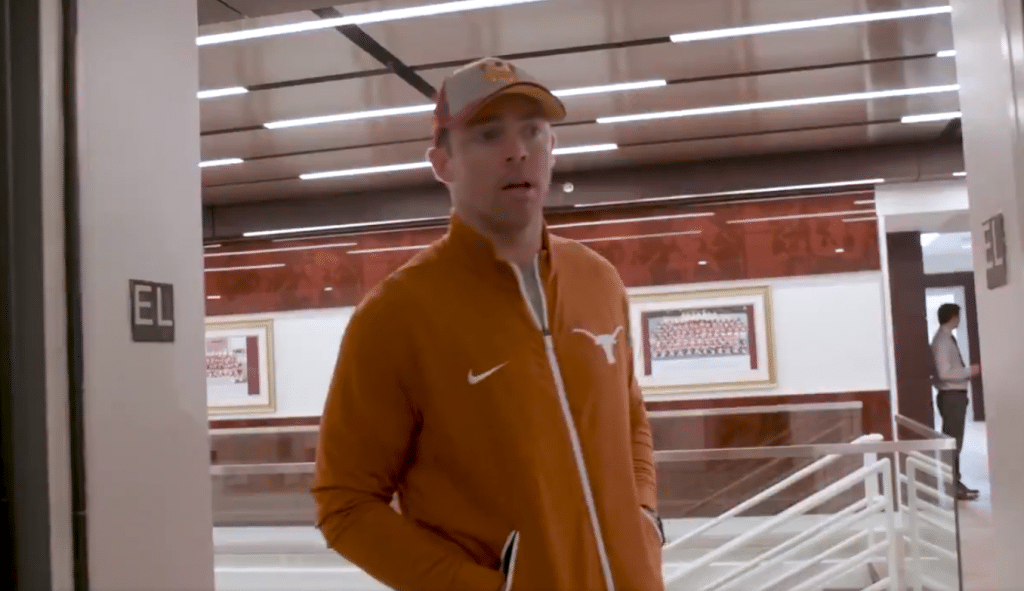 Not quite Colt back on the UT campus, but this video sure makes it feel like McCoy’s presence will be with the Longhorns on Saturday for the Red River Rivalry.

Decked out in his Texas gear, McCoy running into Adrian Peterson, Trent Williams, Tress Way and Samaje Perine in an awkward yet charming run-in shows why No. 12 is still so beloved on the Forty Acres (Video courtesy @Redskins Twitter).

Running into the contingent of former Sooners during Texas-OU week, McCoy puts in the work and heads to the stairs.

Texas junior wide receiver wants to wear a crown when he returns to his hometown of Dallas this weekend.

Should the Horns upend Oklahoma in the Red River Showdown, Texas will rightfully reclaim the Gold Hat to display in the trophy case on the Forty Acres. Even though he sports thick, flowing hair, Humphrey said he’d find a way to get the hat on his head after a win.

“The only thing I want to happen Saturday morning is at the end of the game, having that Golden Hat on my head, that’s the only thing I’m really worried about,” he said. About whether it would fit, he continued, “Probably not with all this hair but we’ll see.”

Humphrey isn’t the only one dreaming of that Golden Hat returning to campus. 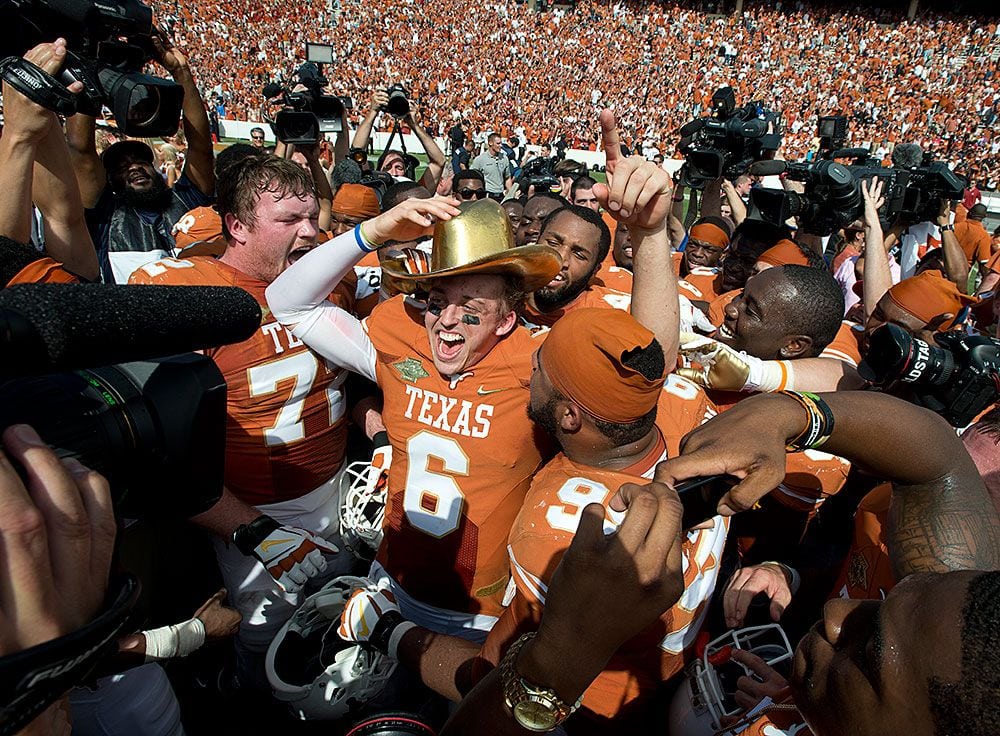 The coveted Golden Hat goes to the annual winner of the Texas-Oklahoma football showdown in Dallas (photo courtesy texassports.com).

“The biggest thing is just bragging rights — being able to get that Golden Hat,’ Jones said. “We have a little section in our facility with an empty spot for the Golden Hat if we win. We hopefully want to bring that one back to Austin.”

Golf Getting in Gear 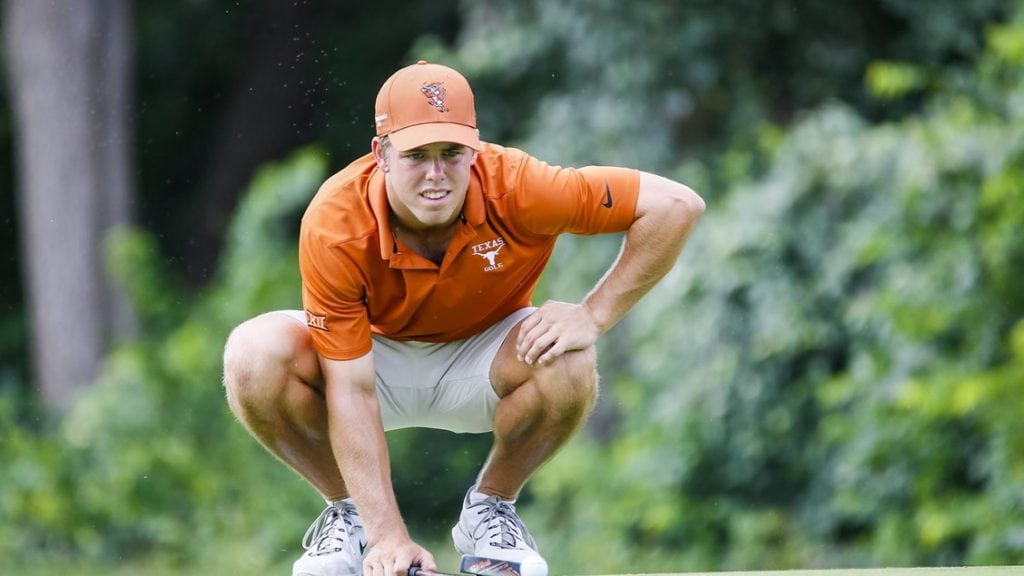 Freshman Pierceson Coody shot a third-round 68 to tie for fifth overall as the No. 8 Texas Men’s Golf closed the Nike Invitational in fifth place Tuesday at Colonial Country Club.

It’s a strong start to the season for Coody, who now has two-top 10 finishes in two tournaments to begin his Texas career.

He made two birdies on the front nine between a bogey and a double bogey, but followed with a flawless back nine where he made birdies on 10, 14, and 18. He finished the event with the second-most of any player in the field with 13.

Another freshman, Cole Hammer, rounded out the Top-19 with a third-round 75 to finish +2 in his Texas debut. Senior Steven Chervony shot a third-round 69 to tie for 29th at +5. Juniors Spencer Soosman and Nick Costello tied for 38th and 55th, respectively.

Duke won the event at -2, while the Blue Devils’ Chandler Eaton earned medalist awards at -6.

Cat Claws Back to the Diamond

Former UT pitching legend Cat Osterman is one of 41 athletes to accept an invite for the 2019 USA Softball Women’s National Team Selections Trials slated for Jan. 1-6, 2019 in Florida.

The Longhorn legend, now 35, hopes to earn a place on the US squad after she was the youngest member on the 2004 Olympic Gold Medal team in Athens in 2004 and grabbed silver four years later in Beijing.

Most recently, Osterman has been serving as an associate head coach on the softball coaching staff at Texas State in San Marcos, Texas.

Had a great time chatting today with @catosterman about her comeback...fueled by a desire to go out on top with a Gold medal

During a decorated career on the Forty Acres, the three-time USA Softball National Collegiate Player of the Year, four-time National Fastpitch Coaches Association (NFCA) All-American and two-time ESPY Award winner for Best Female College Athlete put up a staggering career record of 136-25 with a 0.51 ERA and 2,265 strikeouts while helping the Longhorns to three Women’s College World Series appearances.

Osterman still holds the NCAA record for highest career strikeout-per-seven-inning ratio at 14.34, remains the only player in NCAA Division I history to lead the nation in ERA on three occasions and managed 20 no-hitters and seven perfect games while at Texas.

The Texas men put four singles main draw players into the ITA All-American, the most of any school in the tournament.

Senior Rodrigo Banzer and junior Christian Sigsgaard made it out of qualifying into the main singles draw of the Saint Francis Health System ITA All-American Championships in Tulsa, Okla. on Tuesday.

That duo will join junior Yuya Ito and senior Harrison Scott who were initially placed into the main singles draw, giving the Longhorns four singles competitors in the main draw, the most of any school in the tournament. Texas will also be represented in the doubles main draw by the pair of Sigsgaard and Scott.

Junior Petra Granic, No. 40 in the Oracle/ITA preseason national singles rankings, is the first Longhorn to qualify for the main draw of the prestigious Riviera/ITA Women’s All-American Championships since Breaunna Addison accomplished the feat in 2015. The tournament’s main draw is scheduled for Thursday, Oct. 4 through Sunday, Oct. 7.

Granic and sophomore Bojana Markovic, No. 21 in the Oracle/ITA preseason national doubles rankings, will compete in the doubles main draw.

Check back to HornsIllustrated.com for updates. 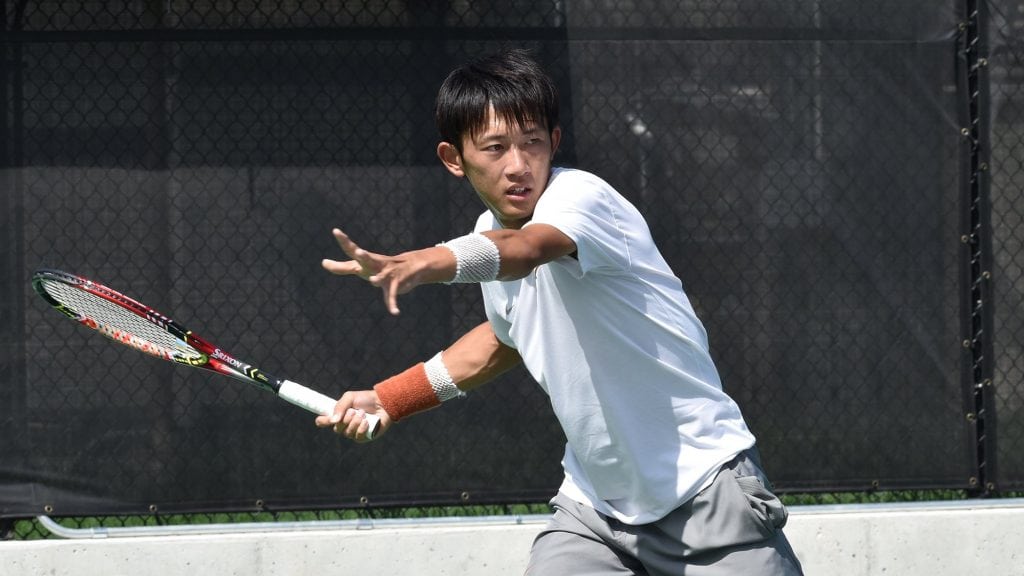 Members of the Texas tennis team are in playing in the Riviera/ITA All-Americans this week (Photo courtesy of texassports.com).

The University of Texas announced its 2018-19 Indoor Track and Field schedule on Thursday morning. Head coach Edrick Floréal is in his first season in Austin, looking to continue building the program with an exciting and challenging indoor slate.

“Announcing the indoor schedule and starting the competitive season is exciting,” Floréal said. “Not only getting to wear the burnt orange and white and represent Texas, but to put to the test the long fall months we have spent training. The early portion of the schedule is designed to both challenge and prepare us for the championship portion of the season where we hope to compete for some shiny hardware. We have stops planned at both the Big 12 and NCAA Championship sites in order to familiarize ourselves with these venues before go time.”

The Longhorn women are looking to defend their Big 12 title from a season ago, their fourth in five years. The men finished second in 2018.

The indoor season begins on Dec. 8 with the Reveille Invitational in College Station. That meet will be one of four meets at Texas A&M on the indoor schedule and one of seven in the state of Texas.

After the holiday break, the Longhorns return to College Station for the Ted Nelson Invite on Saturday, Jan. 12. They’ll then travel to Birmingham, Ala. for the Samford Invitational and Samford Open on Jan. 18-19, the site of the 2019 NCAA Indoor Championships (March 8-9).

After the Samford Invite/Open, the Longhorns will be split between the Houston Invitational and the UW Invitational (Seattle) the weekend of Jan. 25-26, before the multis return to College Station in the first weekend of February (1-2) for the Charlie Thomas Invite. The squad will split for the Texas Tech Shootout (site of the 2019 Big 12 Indoor Championships) and the Husky Invite (Seattle) the following weekend (Feb. 8-9) before closing out the regular season with the Texas A&M Aggie Twilight and the Alex Wilson Invitational (South Bend, Ind.) on Saturday, Feb. 16.