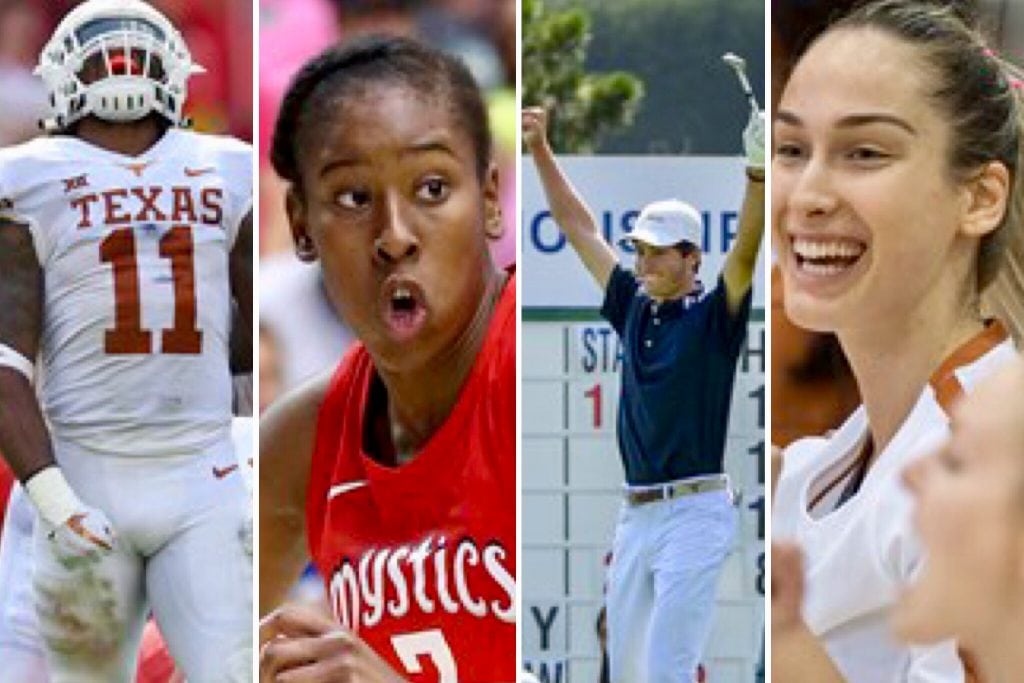 There’s a buzz about the Forty Acres this week. Most weeks, and days, really.

Along with the volleyball team hosting its home opener (plus No. 16 Kentucky the next day), women’s soccer has two home matches and the Texas Men’s Golf team is showing off some accomplishments around the country.

Welcome to our 411 on The Forty Acres, a roundup of what’s happening and a look ahead at what’s shaking into this weekend during the first full week of the fall semester back on The University of Texas campus.

A native Texan and Longhorn representing at the next level, Ariel Atkins hops from success at Texas to a chance at the WNBA Championship. Atkins and her Washington Mystics start a best-of-five series Thursday for the WNBA Title.

Hailing from Duncanville, the 20th leading scorer in UT history netted a game-high 20 points in the conference clincher as Atkins helped her team take home a win in the semifinals in the fifth and decisive game to advance to the finals.

It’s no shock to see Atkins starring on the big stage. She was named to the six-person Associated Press All-Rookie Team this year and earned a spot on the WNBA’s All-Defensive Second Team. Two former Longhorns have won WNBA Championships – NeKeshia Henderson (Houston, 1997 and 2000) and Fran Harris (Houston, 1997).

Complete information about the 2018 WNBA Playoffs is available here: http://www.wnba.com/playoffs2018/.

A freshman sensation before the season has even began, new Longhorn Cole Hammer is competing in the US World Amateur Team Championship at Carton House Golf Club in Dublin, Ireland through Sept. 8.

Already leaving a mark, Hammer was selected to represent the US along with USC’s Justin Suh and California’s Colin Morikawa.

The World Amateur Team Championships are a biennial international amateur golf competition rotated among three geographic zones of the world: Asia-Pacific, American and European-African. The winning team in the men’s competition receives custody of the Eisenhower Trophy for the ensuing two years. The lowest individual score in each championship is recognized at the respective closing ceremony.

Hammer is the third Longhorn to be selected for the event. Scottie Scheffler represented the US in 2016 and Beau Hossler made the team in 2014. For more, visit https://www.igfgolf.org/2018/08/27/everything-you-need-to-know-about-the-2018-world-amateur-team-championships/

Game(s) On At Gregory

Ready to take on more top teams, the ever-exhilarating Texas Volleyball team hosts its first — and second — home matches of the season this week.

The American Campus Classic kicks off the home campaign for the No. 6 Longhorns with both games streaming live on ESPN 3.

First comes Texas State Thursday night at 7 pm, followed by No. 16 Kentucky visiting the Forty Acres Friday at 8 pm And get into Gregory Gym early Thursday because the first 700 students through the doors at 6 get a free Horns’ House t-shirt. Not to mention home games in Gregory get everyone's excitement to another level.

Texas loves to show its cohesion and competitive spirit off at home. Coming off its first loss of the season at No. 8 Wisconsin in front of a sold-out crowd of 7,052 last weekend, the Longhorns came back to sweep High Point on Sunday and have played three ranked opponents in their first four matches.

More Honors From the Pitch

Now up to No. 11 in the Soccer America Poll, the Texas Soccer team snagged another honor as Mackenzie McFarland was named Big 12 Freshman of the Week.

Another Texan making an impact early on the Forty Acres, McFarland had the game-winner against Long Beach State last week. The Longhorns host two matches this week, hosting Texas State Friday at 6 pm and at home against Houston Baptist 5 pm Sunday.

The Coppell product scored her first career goal off a long attempt by senior midfielder Kayra Dollas that rattled off the crossbar, where she was able to take a quick touch and blast her first career match-winner into the left side of the twine from seven yards out.

Friday’s match will be broadcast live on Longhorn Network, and the first 300 fans in attendance will receive a free “This is Texas” tank top.

A new pregame tradition for young Longhorns starts this Saturday before the Texas Longhorns host their first home game of the season. On Sept. 8 before the Tulsa game, The Hook 'Em Herd gives children ages 7-12 a chance to take part in a 100-yard dash on the field at Darrell K Royal-Texas Memorial Stadium. A limited number of spots are available for the fun run prior to each home game.

The Hook 'Em Herd drop-off/pickup information, wristbands, and check-in is available near the north entrance of the Etter-Harbin Alumni Center on Bevo Blvd. during gamedays.

All kids receive a commemorative The Hook 'Em Herd T-shirt and must have a ticket to the game in order to participate.

Standout Women’s Tennis junior Bianca Turati was tabbed to play in against the top players in the nation. Meanwhile, Texas Men’s Tennis team members Yuya Ito and Christian Sigsgaard got the call to compete at the 2018 Oracle ITA Masters Sept. 20-23 in Malibu, Calif., at the Malibu Racquet Club and Pepperdine University.

Entering its fourth year of existence, the 2018 Oracle ITA Masters will again feature 32-player singles competitors per gender. Invitations were sent out to one man and one woman from each Division I Conference to participate, with criteria similar to the NCAA Tournament being used.

With Turati atop the lineup, Texas posted its highest final team ranking (No. 6) since 2005. UT won its first outright Big 12 regular-season title since 2004 and its first Big 12 tournament title since 2013. The Longhorns advanced to the NCAA Championships Round of 16.

Both Big 12 Conference schedules for men’s and women’s basketball were released this week.

Texas Women’s Basketball league games will begin on Wednesday, January 2 and conclude on Tuesday, March 5. Times and television information will be announced at a later date.