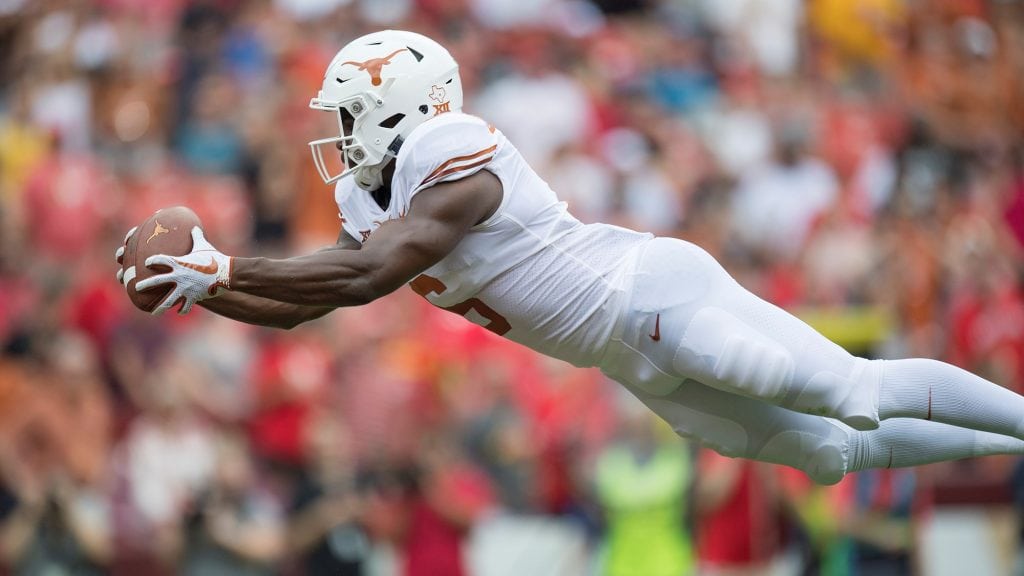 It's no stretch, the Texas Football team needs to take offense by the Horns. (Photo courtesy texassports.com)

Don’t Beat Yourself Up

“We beat ourselves more, so we have to focus on us,” senior running back Tre Watson lamented.

Horns senior linebacker Breckyn Hager had to shake his head, and agreed with the sentiments.

“I feel like we were too passionate and too riled up. We wanted that game so bad,” he said, “we were so excited and ready to play. I don't know what it is, we just played real tight. We didn't just let it loose.”

While Week 1 didn’t “feel like last year,” according to head coach Tom Herman, like last year, it still feels like the Horns have their arm in someone else's hands as they say "stop hitting yourself."

How hard the Horns are on themselves after the tough loss last week, versus how they grow from adversity and learn to stop beating themselves in-game, will go a long way to how long they play this year.

“I think just the first game jitters kind of deal,” senior Charles Omenihu said. “(It’s) not an excuse but I think that had a role to play in it. But you have to find ways to try and eliminate that so it's not a constant kind of thing.”

Rebound Better Than Before

Last year, Texas took the loss to Maryland and never truly recovered in finishing just above .500 for the season with the slow start this season feeling all too familiar.

This season, Omenihu admitted he was surprised the team took off to a slow start, but says he knows that won’t — and can’t— continue. The gamut of games coming against fierce foes means the Horns have to bounce back in a way that they continue to grow if they want back in the Top 25. And beyond.

“Yeah, I'm not going to lie it did (surprise me),” the senior Omenihu said. “But again we as a group just have to understand that this is something that can't be a continuous kind of thing. It can't be a thing that we're going to start slow and then get going. It has to be full pedal on the gas from start to finish.”

Take Offense. By the Horns.

Texas took too long to get the gears going smoothly.

That won’t be the case against Tulsa come Saturday’s home opener at DKR Texas-Memorial Stadium.

“It was epic. It was fun. It was a big time catch and it's what you work for all off-season,” Duvernay said of his catch.

The senior Longhorn said the start and the finish have to match to accomplish more of that. “We just have to finish the game. We have to execute better and be more sound on offense,” he said.

Texas could show us — and the world — some new wrinkles Saturday, or the things they’ve been on the cusp of bringing to fruition could come to the forefront.

A fast start, a firm finish, and the Horns just may … well, hook even the nonbelievers back in.

“I think that when we're going fast, we aren't allowing the defenses get in their perfect calls. We're not allowing them to get to the perfect setup for each formation that they have in the game,” sophomore quarterback Sam Ehlinger said. “When we're going fast like that I think we all kind of pickup a momentum and we pick up a confidence level because we're just chipping away at them slowly and slowly and slowly and finally we hit them deep.”

Should Texas tighten up those little things they’re talking about, this team easily goes from formidable to consistent.

Five of Texas seven losses in the Herman Era have come by seven or fewer points. It’s up to Texas to decide if that’s a harbinger of good things to come, or a foreshadowing of being unable to escape their own shadow again.

“(We have to) be prepared to go out there and make plays from the first snap,” said Omenihu of the team’s talk postgame. “Doing your job to the highest level and reiterating that.”

The Texas team reiterated that the loss to Maryland wouldn't linger. It didn't appear to a year ago, when the Horns crushed San Jose State 56-0 but lost at USC by just three the following week.

With three consecutive home games starting this week, a clean sweep would put Horns in good shape heading to the back half of their schedule. After Tulsa, No. 17 USC comes visiting followed by No. 16 TCU. After those two tough tests, a 3-1 record after four weeks of play would be some sweet homecooking.

It’s an old adage — is it the heat or the humidity?

Against Maryland in the opener, it was both for the Texas football team. Needing to keep its cool, the Longhorns couldn’t ground down against the early offense and onslaught from the Terrapins and fell far behind in the early going. Then it cooled down considerably, eventually leading to a rain delay as Texas was making hay toward a bid for the win.

But it was too late for a cool comeback and a hot start to the season with a win.

The heightened humidity in Maryland at the start of the game, along with the rain delay which inadvertently let the Terrapins D rest at a crucial time of the comeback, factored into the game whether the Horns wanted weather to be a factor or not.

“Going in, the humidity got me for sure and I was cramping by the first quarter,” Hager said. “My cramps got so bad that eventually I couldn't walk. That's what happened in the end zone.”

Saturday is set to have a high of 86 degrees and possible thunderstorms, which could elevate the humidity here at home, and/or it could cool things off and even lead to a surprising weather delay a second straight week.

Hopefully, come Hell, high water, or another halftime deficit, the Horns are prepared to prove this season still has blue skies ahead.