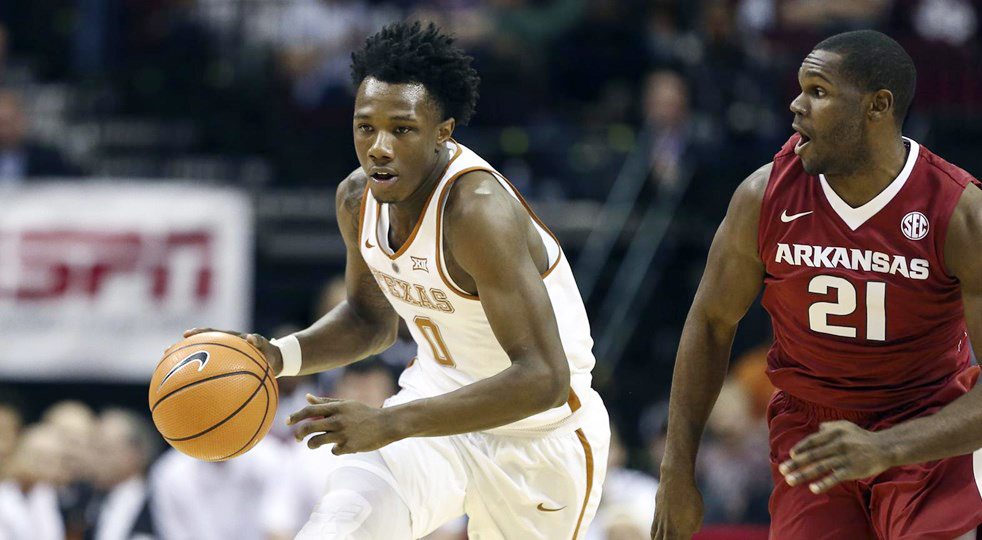 Sophomore swingman Tevin Mack led the University of Texas men's basketball team with 20 points and 12 rebounds, but his double-double was not enough as the Longhorns fell to Arkansas, 77-74 (photo courtesy of texassports.com).

HOUSTON, Texas — There are plenty of Texas men's basketball fans who remember just how heated things used the get when the Longhorns regularly knocked heads with Arkansas back in the days when the two teams were in the Southwest Conference.

Macon repeatedly drove into the paint to challenge UT's big men, was 14 of 14 from the free throw line and scored the decisive points from the charity stripe with 22 seconds to play.

Arkansas was up by just three, 65-62, with 3:31 to play before back-to-back three-point plays by guard Jaylen Barford and forward Moses Kingsley gave the Razorbacks a 71-62 advantage.

Texas cut into the lead as sophomore swingman Tevin Mack scored six straight points, and two free throws by guard Andrew Jones brought the Longhorns to within 73-70. After a Longhorn stop, Jones hit one of two free throws with 41.7 seconds to play as Texas crept to within two points.

After a three-pointer by Mack and an Arkansas turnover, Texas had a chance to tie but Roach’s wild three-pointer at the buzzer didn’t even reach the rim.

“We tried to get the ball to Tevin but Arkansas did a good job of covering him up so Snoop (Roach) took the shot,” Texas coach Shaka Smart said. “They defended him well, too, but he’s made that shot with a hand in his face before.”

Texas missed 17 layups and 13 free throws in this game and still just lost by three points.

“We’re not frustrated — it’s really more disappointment,” Mack said. “We could have easily won this game, like Michigan [another three-point loss], but we just didn't make plays down the stretch.”

Texas led throughout the first half, and by as many as seven points, before three free throws by Macon after getting fouled on a three-point attempt, pushed Arkansas to a 30-28 lead with 3:13 to play before the intermission.

The Longhorns responded with 7-0 run to end the half, scoring on a putback dunk by Allen, two free throws by Cleare, a free throw by Jones and another dunk by Allen to take a 35-30 lead into intermission.

Mack and Jones led the Longhorns with eight points in the first half while Macon’s 11 points paced the Razorbacks. Texas outshot Arkansas, 40.6-26.5 percent, in the first 20 minutes as the Razorbacks hit just one of nine attempts from beyond the three-point arc.

Arkansas stayed within shouting distance because it owned an 11-2 advantage in bench scoring in the first half.

Texas led 42-39 after a jumper by Allen with 16:05 to play.  The Razorbacks used a 15-3 run over four-and-a-half minutes early in the second half to run past Texas and assume a 54-45 lead. The Longhorns failed to make any of its eight field goal attempts during that swoon.

Texas answered with a 13-7 run of its own to get back in the game, setting the stage for the tense end of the game. A three-point play by Jones with 4:41 to play tied the game at 61.

“We did a great job of attacking the basket and getting to the free throw line, and then making them,” Arkansas coach Frank Anderson said. “This game was a battle, just like in the old days of the Southwest Conference. We had to teach these guys about the rivalry with Texas, but I think now they understand how intense it can get.”

The Longhorns return to the floor when they host UAB at 7 p.m. Wednesday in the Frank Erwin Center.