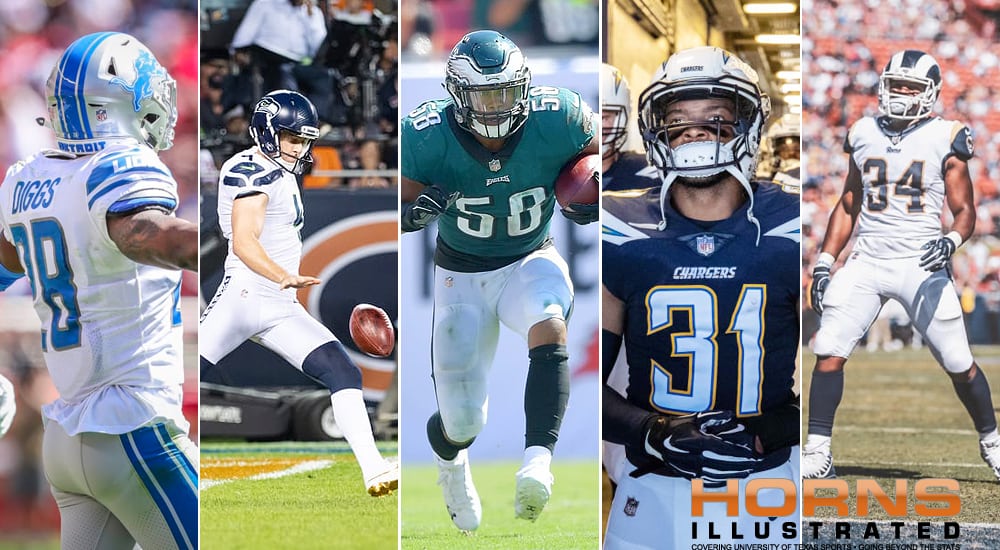 While Texas fans continue to celebrate the Longhorns’ win over USC and wonder if the victory really means the UT team has turned the corner after its season-opening loss to Maryland and narrow victory over Tulsa, there is another group of Longhorns preparing for games that have nothing to do with Saturday’s Big 12 opener against TCU.

NFL rosters are littered with former Texas players, some of whom are making significant impacts for their teams, including:

Los Angeles running back Malcolm Brown had 12 carries for 46 yards with a long carry of 19 yards in the Rams’ 34-0 victory over the Arizona Cardinals.

Seattle punter Michael Dickson averaged 45.1 yards on seven punts, with a long of 55 yards — as well as an onside kick on a drop kick — in the Seahawks’ 24-17 loss to the Chicago Bears. Safety Earl Thomas had six tackles, giving the ninth-year veteran 456 in his career.

Detroit cornerback Quandre Diggs had five tackles and two passes defensed in the Lions’ 30-27 loss to the San Francisco 49ers.

Linebacker Jordan Hicks had nine tackles in the Philadelphia Eagles’ 27-21 loss to the Atlanta Falcons.

Safety Adrian Phillips had five tackles and an interception, the fifth in his career that is entering its fourth season, in the Los Angeles Chargers’ 31-20 victory over the Buffalo Bills.

The most accurate kicker in NFL history, Baltimore’s Justin Tucker attempted just one field, but he made it count, converting from 55 yards the Ravens’ 34-23 loss to the Cincinnati Bengals.

In his first season with the Tennessee after spending the first five years of his career with the New Orleans Saints, safety Kenny Vaccaro had six tackles in the Titans’ 20-17 win over the Houston Texans.