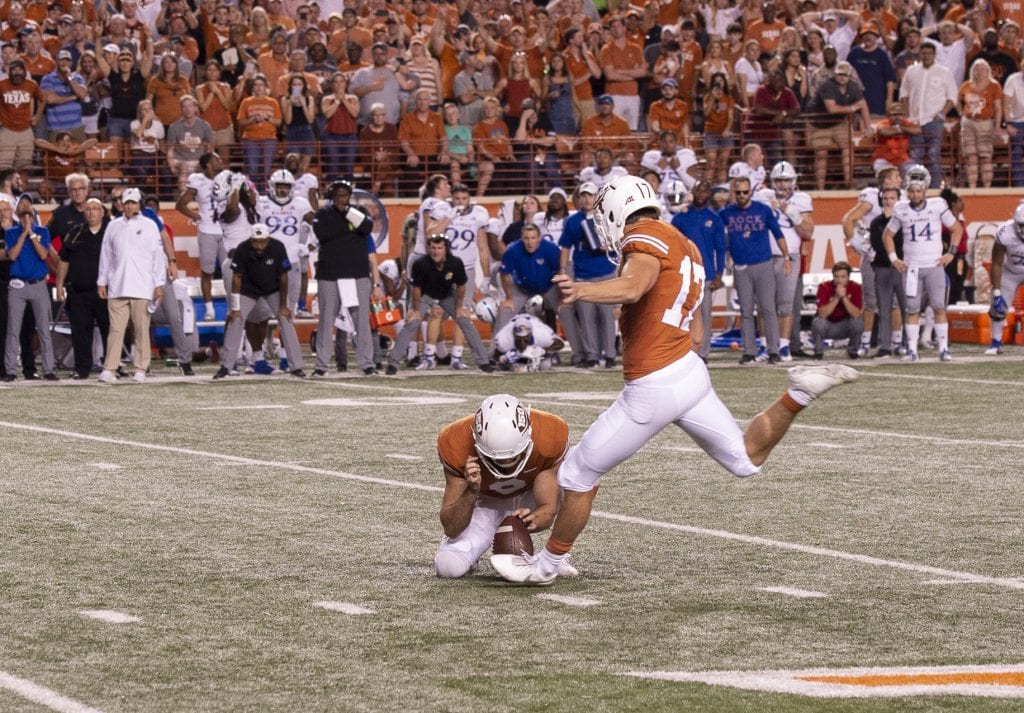 Who was the most important player for Texas in the narrow win over Kansas?

That would be Sam Ehlinger, who passed for 399 yards and four touchdowns while running for 91 additional yards, all on scrambles after a play broke down or the Kansas rush was too much to handle. 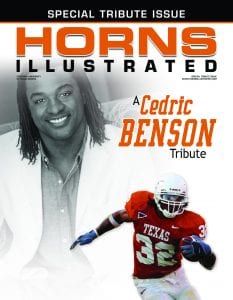 Get The Cedric Benson Tribute Issue

Ehlinger remains the heart and soul of this team, and when he talks his teammates take heed. With the four touchdown passes Saturday, he became the first Texas quarterback ever to throw for four touchdowns in four different games in the same season.

He was the one walking down the Longhorns’ sideline pumping up his offense after the Jayhawks took a 48-47 lead with 1:11 to play, telling them, “Just like Tuesday practice.” Then he went out and made three perfect passes, two of them to Collin Johnson, on a 60-yard drive that set the stage for Cameron Dicker’s game-winning 33-yard field goal on the game’s final play.

“There was no stress — no stress,” Ehlinger said. “We've had a 100-percent success rate on that 2-minute drill in practice, and it just translated onto the field.”

The junior quarterback’s confidence was high because he knew it was just a matter of translating all those practice reps into a reality.

“The message that was communicated was that we didn't have to do anything different,” Ehlinger explained. “Every individual do their job, and we'll move the ball down the field, just like we do in practice, and win the game.”

Perhaps it was because it was Ehlinger doing the translating, and triggering the Longhorns’ confidence and belief. That’s why he was Texas’s most important player on Saturday and the one player is considered indispensable for the Longhorns.

“That guy just has some unbelievable composure and is one of the most competitive human beings I've ever been around,” Johnson said. “I know if I'm going to war or If I'm going on a game-winning drive and I can have anyone in the nation on my side, I want Sam.”

Texas entered the game on a pace to be statistically the worst defense in team history in yards allowed and passing yards allowed, then took a further step backward against a Kansas team that is working on its third offensive coordinator since December. The Jayhawks racked up 569 total yards, 310 of those through the air from Carter Stanley, who is a good, but not great, quarterback in a conference of real gunslingers. 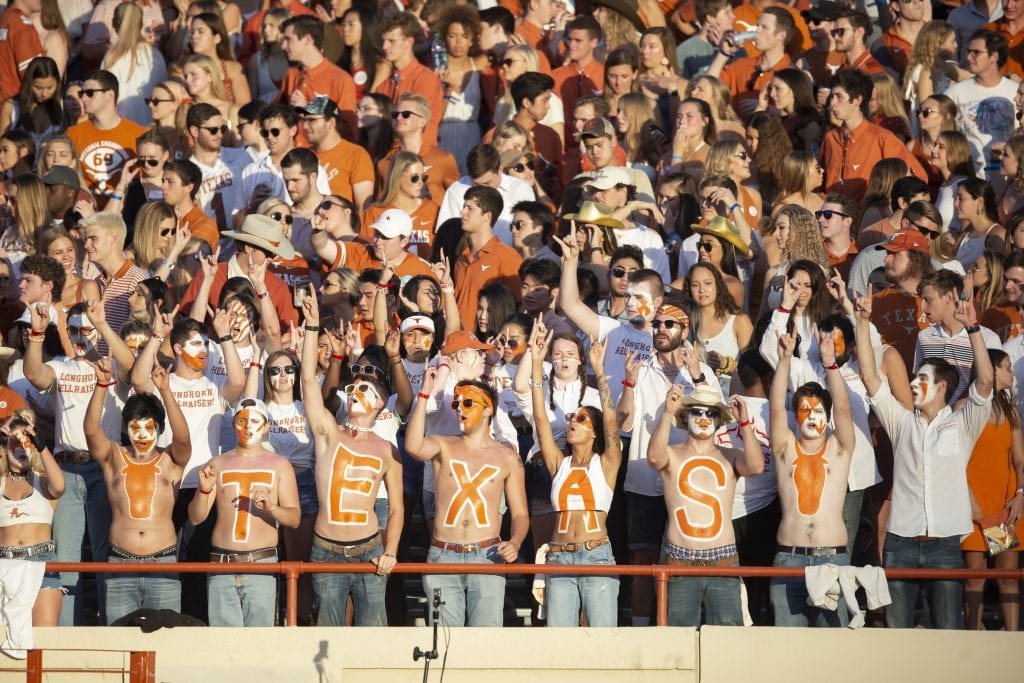 And for the second straight week, the Longhorns run defense struggled as well. Texas surrendered 259 total yards on the ground, 190 of them by running back Pooka Williams, who produced the highest figure any opponent has posted in the Tom Herman era at Texas.

“It's not like our defensive coaches were kind of throwing up their hands. We were making adjustments,” Herman said. “We were trying everything we could to kind of make (our players) understand the schemes that they were seeing, and at times we did a good job. At times we didn't.”

Be it injuries, missed tackles, broken assignments, a bad scheme or just plain poor play, something has to change and change quickly.

On Kansas’ final drive, Texas had former walk-on Mason Ramirez, who has shifted from defense to offense and then back to defense this season, on the field and trying to cover Kansas’s slot receiver.

“I can't remember when we moved (Ramirez back),” Herman said. “It hasn't been more than two weeks. It might have been early this week or last week, but he had practiced. He was in the meetings and got some reps in practice but not a whole lot.”

That’s the desperation mode of the Texas defense right now — throw anyone out there that’s reasonably healthy and see if they can make a play or two.

Safety Brandon Jones was the latest Texas defensive back to succumb to injury, leaving the game with seven minutes to play with a stinger that never cleared up. Jones is set to be evaluated this week, but stingers are usually not too severe so there is hope of having him back sooner rather than later.

What was the biggest play in the game?

Plenty of votes will be cast for Dicker’s game-winning kick (photo from Don Bender / Horns Illustrated) or a crucial Ehlinger run on third down and 13 in the fourth quarter that kept alive a drive. Yet Herman went in a different direction, so we will as well.

After Kansas scored with 10 minutes left to pull within 31-30, the Longhorns’ Malcolm Roach crashed through the line and blocked Liam Jones’ PAT attempt. The bouncing ball found its way to D’Shawn Jamison, who may be the Longhorns’ fastest player, and he returned it 98 yards for two points that allowed Texas to move to a 33-30 lead.

“That block and scoop was the biggest play of the game,” Herman said.

In the big picture, those two points were the difference in a 50-48 win.

Who were the Longhorns’ breakout players?

Two defensive players: sophomore safety DeMarvion Overshown and redshirt freshman Byron Vaughns made huge impacts in the game and were standouts for the flawed unit.

Overshown was flying all over the field to inflict big hits and make plays, including a huge pass breakup of a deep ball in the second quarter. Vaughns had eight tackles, which trailed only Jones’ 10 stops for the Longhorns’ defense.

“I know Byron had a bunch of tackles, and I did see him struggling to get lined up at times, which we've got to correct,” Herman said. “I know DeMarvion can run and hit. I don't know assignment-wise and technique-wise [how they played]..it’s way too early. But I did feel both of them on the field.”

There were plenty of other new players getting real reps on the defensive side of the ball. Freshman defensive lineman Moro Ojomo and Overshown made their first career starts and freshman linebacker David Gbenda, who, like Ramirez, was working at running back earlier this season, also started for the first time.

“You’ve just got to keep going, keep working,” Texas linebacker Joseph Ossai said. “Next guys up — they’re pretty tough guys. They’re pretty good. They may be young, but you’ve just got to work with them. Get in a room, get them as much film as you can. Do what you can to scrap out a win. That’s what we’re doing.”

What’s next for Texas?

There will be no rest for the weary Longhorns, as they continue through the Big 12 gauntlet with a dustup against TCU in Fort Worth next Saturday, Oct. 26. The Horned Frogs (3-3, 1-2 in Big 12 play) fell to Kansas State 24-17 on Oct. 19 and have dropped two games in a row.

Herman said that while his team is pleased to have defeated Kansas, the preparation for TCU will not waver from the routine the team has set throughout the year.

An assessment of personnel and best places to put players as the team battles through the spout of injuries is sure to be part of that preparation.

“The first thing is we've got to make sure the best 11 are on the field, certainly that give us the best chance, and then we've got to continue to train those guys from a technique, assignment, fundamentals standpoint,” Herman said.

After the Horned Frogs and their second bye week of the season on Nov. 2, Texas finishes with a home game against Kansas State, road contests at Iowa State and Baylor and a final home battle against Texas Tech on Black Friday morning.