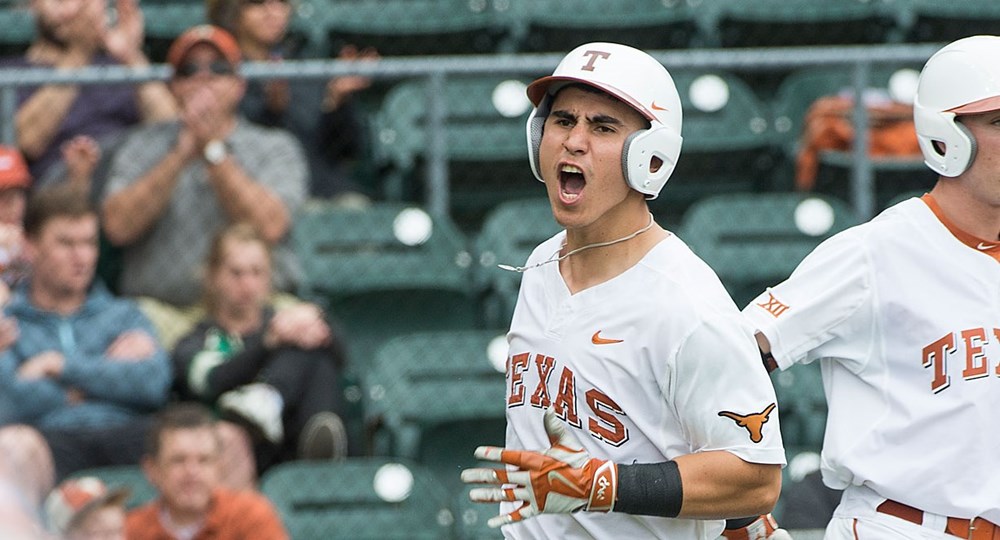 After a two-game call-up at the end of the 2019 season, former Texas catcher Tres Barrera is hoping to stick this season with the Washington Nationals (photo courtesy of texassports.com).

The upcoming Major League Baseball season will not resemble any previous campaign. Professional baseball will be played, but it will not look even vaguely familiar. For 2020 only, a "player pool" will be added, allowing teams to carry up to 60 players — 30 on the opening day roster, and up to 30 potential reserves at an alternate training site — to allow for ample reinforcements should several players on one team come down with Covid-19 and be held out for an extended amount of time.

The 60-player "spring (summer) training" rosters, many of which were announced over the past couple of days, will include several former Longhorns:

Dillon Peters was drafted out of high school but instead chose to play at Texas. He overcame Tommy John surgery during his junior season, working his way into the draft and up through the minors. He made his MLB debut in September 2017, but until 2019 bounced up and down between the big leagues and AAA level. He signed before the 2019 campaign with the Los Angeles Angels, who inserted him in the starting rotation. He started 12 games, going 4-4 with a 5.38 earned run average.

Peters finished his career at UT ranked second among active Big 12 pitchers in career ERA (2.26) and was tied for third in wins with 17. Arguably the best performance of his career came at the beginning of his junior season in 2014, when he struck out six in an eight-inning shutout of Rice. In addition, the final outing of his college career came in the Big 12 Championships when he tossed five scoreless innings against Oklahoma State.

Brandon Workman once again will assume the closer's role for the Boston Red Sox, with whom he has spent all seven of his MLB seasons. After returning from Tommy John surgery in 2017, Workman excelled in 2019, compiling a 10-1 record with 16 saves and 104 strikeouts in 73 appearances.

Former Longhorn second baseman Bret Boswell will be playing for the Colorado Rockies. In just three years of pro ball, Boswell has a cumulative .269 batting average, 53 homers, and 159 RBI.

Wearing the burnt orange and white, Boswell separated himself with his glove, being named an American Baseball Coaches Association (ABCA) Rawlings Gold Glove Finalist at second base following his junior season in 2017. He posted a .993 fielding percentage that year. He also came up big in key games, such as the 2017 Big 12 Championship game against Oklahoma State in which he posted a season-high three hits.

For the defending World Series champs, former Texas catcher Tres Barrera is hoping he will be back in D.C. for another season at the big league level. Last year, he set himself apart as one of the better hitting catchers in the Washington organization, with a .249 batting average an 46 RBI. He was called up to the big league club in September and appeared in two games.

As a Longhorn, Barrera was a fixture behind the plate. During his final year in Austin in 2016, he started all 57 games, and earned All-Big 12 honors for both a .990 fielding percentage, a .289 batting average and 37 RBI.