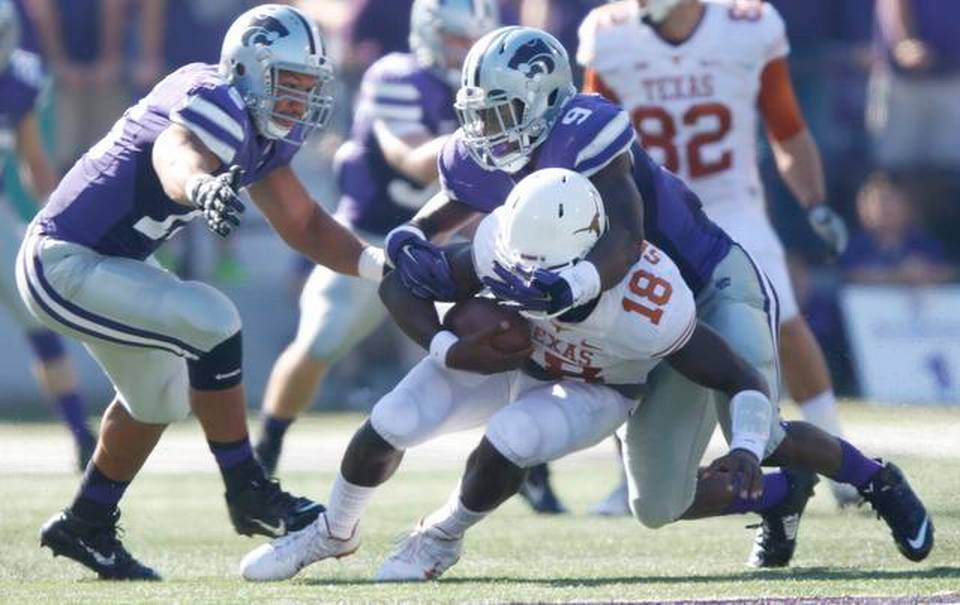 If Texas wants to make a bowl game, they must improve upon their 4-19 record against ranked opponents in the post-Colt McCoy era. (Bo Rader/The Wichita Eagle)

The brutal fact is that Texas must defeat a ranked opponent to avoid missing out on their first bowl game since Garrett Gilbert was taking snaps behind center. And with three games remaining, today’s matchup at DKR against No. 23 West Virginia represents the Longhorns’ best chance to pick up such a win.

At 4-5, the Longhorns sit two wins away from securing a spot in one of the Big 12 conference’s lesser bowl games (likely the Lockheed Martin Armed Forces Bowl), but a difficult schedule that includes a couple of home games against ranked opponents straddling a trip to Stillwater has the Longhorns sweating their postseason fate.

Sporting a mere three losses, all against Top-10-ranked teams, and coming off a brutal defeat against TCU at Morgantown, West Virginia comes to Austin as 3-point favorites. However, this spread is likely friendlier than the one Texas will receive against No. 6-ranked, and conference leading, TCU on Thanksgiving. Thus, the pressure is on Texas to win now.

Though prognosticators see the Mountaineers as a favorable matchup for the Longhorns’ strong running game, looking at Texas’ recent struggles against ranked teams is enough to put even the most optimistic fan on edge. In four tries, Texas has yet to pick up a win against a ranked opponent this season and has not beaten a team in the Top 25 since defeating No. 12 Oklahoma last year.

The culprits to the Longhorns’ woes appear to be ranked teams and non-conference opponents (4 of the other 7 losses came in non-conference games). To put it bluntly, if an opponent has a number to the left of its name, or is BYU, the Longhorns' chances of winning decrease by 75 percent.

There is no doubt Texas’ game against West Virginia could be a season-defining win, or season-ending loss, for this Longhorn squad. However, the game is also important as it represents an opportunity, in the most opportune of times, for the Longhorns to reverse a troubling trend against ranked opponents.