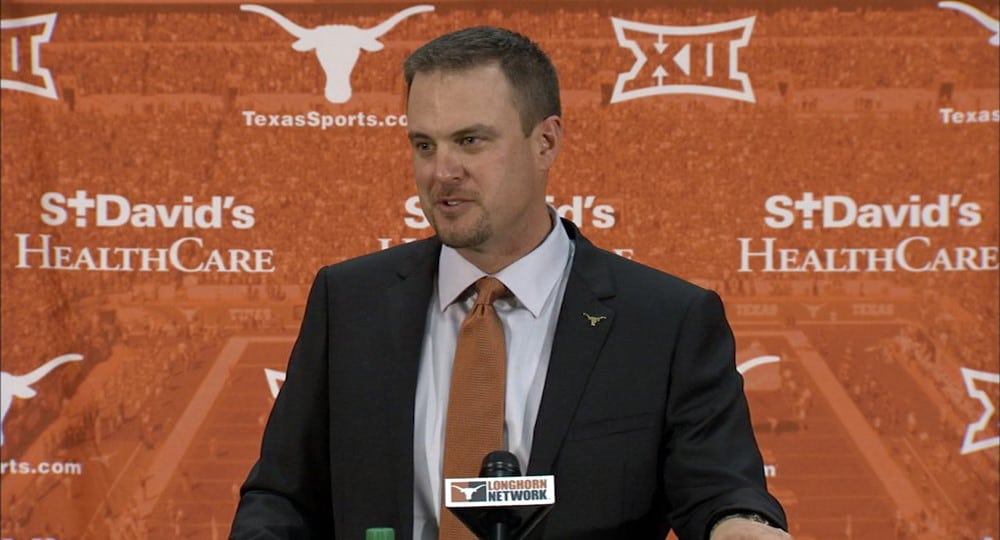 Texas football head coach Tom Herman said that a year ago, he and the UT staff were teaching basics of their systems and how they expected the Longhorns to practice; a year later, he said, they're teaching more football (photo courtesy of texassports.com).

AUSTIN, Texas — Texas football coach Tom Herman is quick to declare that his second Longhorns team will be bigger, stronger, more invested, better coached and ultimately more ready to contest for the Big 12 championship and beyond.

That’s excellent news for the Longhorns faithful and, really, college football in general. A good Texas team — one that competes regularly for conference and national titles — is always important for the game itself.

Herman met with the assembled media Thursday in advance of the Longhorns preseason camp, which begins Friday at Denius Fields on the near-east side of the 40 Acres.

Texas was ranked 21st in the preseason Amway coaches’ poll that was released Thursday. There will be plenty of questions to be answered between now and opening day Sept. 1 against Maryland at FedEx Field in Landover, Maryland, in the shadow of the nation’s capital, but for now Herman said his team is on the right track from its offseason workouts.

“I'm excited to see our football team play football,” Herman said. “We haven't done that since the spring game. We've had an amazing summer. Our guys are in unbelievable shape.

Herman explained that he and his staff are now more efficient at coaching the group of players that will don the burnt orange and white this season, a byproduct of a year of coaching at Texas under their collective belt and the players’ willingness to buy in to what the staff is teaching.

“We're coaching a lot more football instead of practice habits, effort, intensity and physicality,” Herman explained. “Those things can be coached. They needed to be when we got here. It's a process. It's the old 'crawl before you walk, walk before you run.' You got to lay a foundation of practice habits, of toughness, of accountability, of a genuine belief in what we're doing. You got to win their hearts and win their minds before you can really teach them any football.

“The biggest thing is we're coaching football — we're coaching individual drills, we're coaching schemes. We're coaching techniques and fundamentals, where that was almost a secondary thought, as to ball security and effort, physicality, not turning down hits or shying away from things. Nowadays, that's ingrained. There are two demands in this program, not things you'll get coached on but demands: that's effort and ball security.

Herman said the things the Longhorns are able to do compared with what they were able to do just a year ago are “incredible.” Whether that translates to victories remains to be seen.

“We have developed as athletes throughout the course of the summer,” Herman said about his players. “Now, in training camp, it's about developing as football players, developing relationships, developing as a team, then learning how to finish.

“Again, I've said it ad nauseam. I'll say it again: I've never been more excited to coach a team in my career.”

Texas ended up 7-6 in 2017 after a Texas Bowl win over Missouri and is expected by many to be better this season, despite losing a handful of key players on both sides of the ball and being unsettled at quarterback, offensive line, linebacker, defensive line and at punter, and with no clue as to who will be the starting running backs when the lights go on for real.

Some other notes from Thursday’s media availability:

Herman said he believes that he has the players who can make a run at the Big 12 championship, saying “if everything goes right, if we stay healthy, I think if we develop both as football players and in our relationship, if we continue to finish and learn how to finish, then we should have a very good chance to achieve our goal, which is to be in contention for the Big 12 championship in the month of November.”

Herman lauded the work of defensive coordinator Todd Orlando and strength coach Yancy McKnight, as he has often done in the past.

“There's a bunch that are honorable mention," Herman said, "but the two guys I'd pick first in my foxhole would be Todd Orlando and Yancy McKnight.”

Herman would not comment on the situation at Ohio State, where he was an assistant coach from 2012-14 under Urban Meyer. Meyer has been placed on paid administrative leave as that university conducts an investigation based on the claims by the wife of another now-former assistant that several people close to Meyer knew of a 2015 allegation of domestic violence against her ex-husband.

“I left the program after the 2015 season ... excuse me, the 2014 season,” Herman said. “The things that occurred to my knowledge happened in late 2015. I really don't think it would be fair or appropriate, to be honest with you, for me to comment about a situation in another program that happened while I wasn't there. It's always been my policy to not comment on another program. We're at Texas. Been at Texas for a year and a half. As sensitive of a subject as this is, to comment in a forum like this I feel would be very inappropriate."