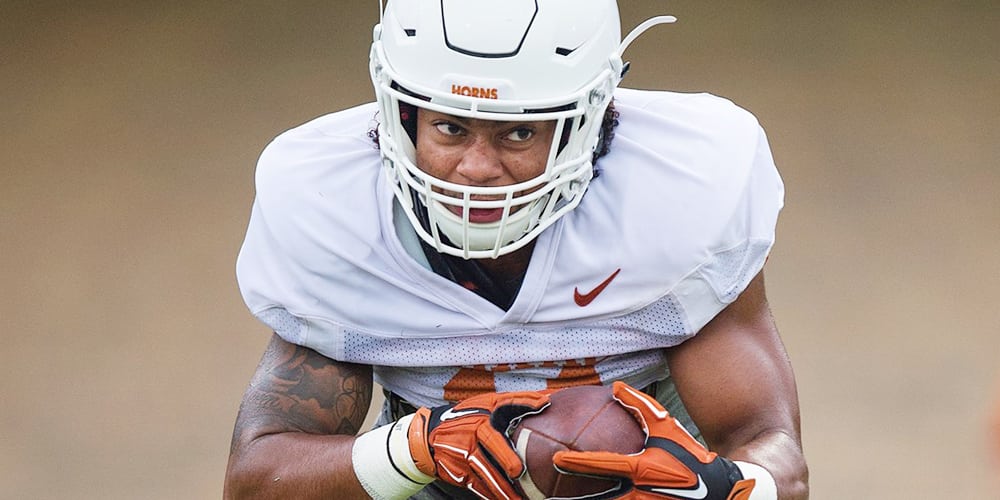 Texas football head coach Tom Herman said senior defensive back P.J. Locke "goes about his business — he a pro. He knows how to take care of his body and knows every assignment and where to be and when to be and how to be there.” (Photo courtesy of texassports.com)

AUSTIN, Texas — The Texas football team's preseason camp has finally reached the time when players are able to conduct workouts in full pads and with full contact, and Longhorns coach Tom Herman said Wednesday that his team was chomping at the bit to get after it.

“Really aggressive, really competitive,” Herman said when asked about the team’s attitude in its first full-pad practice. “When you put pull pads on and say ‘live,' they enjoy that.”

Herman met with the media at the end of practice for a 12-minute press conference at the Wright-Whitaker Sports Complex in north-central Austin, where the Longhorns will work out for the first two weeks of contact drills.

“We had a really good day for being the first time in pads and with full contact and tackling,” Herman said. “Our guys responded well. Both sides of the ball played really hard and were flying around. We are well ahead of where we were at this time last year, but we have to continue that, obviously.

“This is a competitive group, man. There is a lot of celebrating when they do things right, on both sides of the ball. There’s a lot of team-policing when thing don’t go right. Guys are so competitive that they get on their teammates to make sure they understand that that’s not how we do things.

Herman said the NCAA’s mandated day off per week (which the Longhorns will take on Mondays during preseason camp) has helped his players recover from some of the early rigors of its work in August.

“We are executing better on offense and we are so much stronger on defense," Herman said, "and we don’t get tired as easy or wear down late in practice as we did last year."

Other items addressed in the quick question-and-answer session:

An early injury report — Herman said junior running back Tristan Houston landed on the football while being tackled, bruised his ribs and will miss a few days of contact in camp. He also revealed that junior linebacker Jeffrey McCullough strained a right pectoral muscle and will be out of contact for a few weeks.

Graduate transfer running back Tre Watson is recovering from knee surgery that kept him out his senior season at Cal. Watson has been limited to seven-on-seven drills and non-contact work and is scheduled to be “cranked up” next week to get back into full contact and being tackled in practice.

Herman responded to a question about why no one has been talking about senior defensive back P.J. Locke in the preseason, saying “P.J. goes about his business — he a pro. He knows how to take care of his body and knows every assignment and where to be and when to be and how to be there. He’s doing great.”

Herman lauded the efforts of university president Greg Fenves and athletic director Chris Del Conte for championing the drive for the $175 million expansion of Royal-Memorial Stadium that was approved Wednesday by the University of Texas System regents. “I’m most excited about the amenities that the expansion and improvements will provide our players, from cyro chambers, to nap rooms, hydrotherapy areas," Herman said. "All (of) that will be the best in the country."

Herman didn’t want to single out any players that have risen above the rest of the squad to date, saying “it’s hard to answer that because I might leave someone out. There are really too many to mention.”

Herman lauded the effort and athleticism of junior running back Kirk Johnson, but added that the playbook for him was like it is for a freshman “because he’s spent most of his time here injured and rehabbing those injuries.”