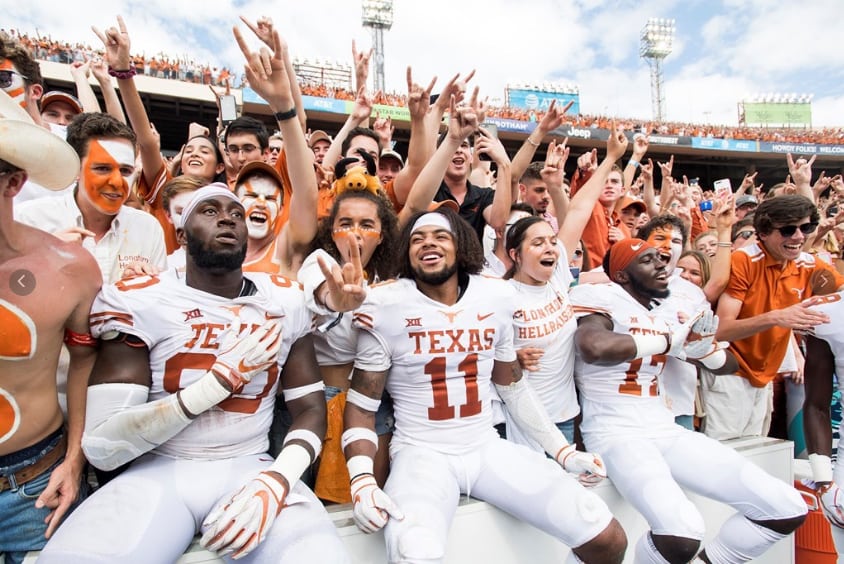 The Texas football team is in the AP top 10 for the first time since 2010 with the Longhorns' win over Oklahoma (photo courtesy of texassports.com).

AUSTIN, Texas — Texas toppled its old nemesis and demons alike, hanging on for a mammoth win over Oklahoma.

The 'Horns are now up to No. 9 in Sunday’s AP Top 25 Poll released today, while the loss dropped Oklahoma down to No. 11.

This marks the very first time Texas has entered the coveted top 10 since September 2010. On top of that, it is the third ranked opponent that Texas took down, after beating both USC and TCU earlier this season.

"It would be foolish for me to not understand the big picture," said Texas head coach Tom Herman, who also recoiled at a mention of the College Football Playoff.

A whooping three teams in the top eight and a staggering eight ranked teams lost Saturday, making room for plenty of movement in the top 25. The Longhorns moved up 10 total spots to No. 9.

Along with the Sooners slipping, Oklahoma State lost its second game and dropped out of the rankings again after just re-entering the top 25 last week.

The highest-ranked Big 12 team, and the league's only remaining undefeated, is No. 6 West Virginia (5-0, 3-0). The Mountaineers go to Texas Nov. 3, and host the Sooners the day after Thanksgiving and a week before the Big 12 championship game.

The SEC has nearly one-third of the rankings spots, with eight teams in the top 25.

For the first time this season, every unbeaten FBS team is ranked. After LSU, Oklahoma and Kentucky lost on Saturday, there are 11 undefeated teams left. The new unbeatens to join the rankings were both from the American Athletic Conference: No. 23 South Florida (5-0) and No. 25 Cincinnati (6-0).

Including UCF, the American has three ranked teams, as many as the Atlantic Coast Conference, Big 12 and Pac-12.

Re-entering the rankings were No. 22 Texas A&M and No. 24 Mississippi State from the SEC.

Information from the AP and ESPN were used in this report.