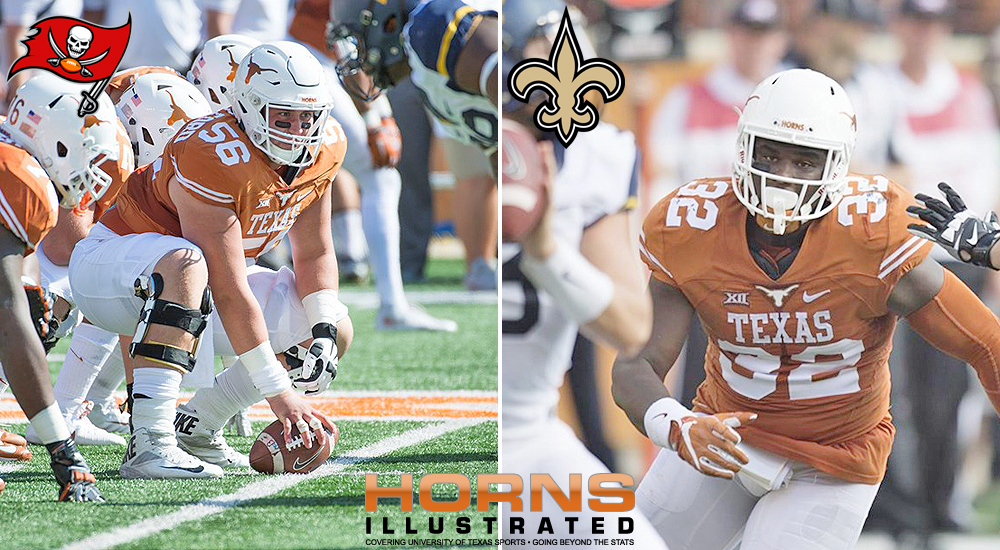 After not hearing their names called in the 2020 NFL Draft, Texas defensive lineman Malcolm Roach and offensive lineman  Zach Shackelford will sign with the New Orleans Saints and Tampa Bay Buccaneers as undrafted free agents, according to statements released through the UT athletic department.

“All my life I’ve dreamed about playing for the Saints,” Roach said. “The way the draft went, it didn’t work out in my favor, but I feel like God has a bigger plan for me. I’m thankful for everything that’s happened, and I’m ready to go out there and prove to people what I can do. I’m ready to go in and make an impact with the Saints and try my hardest to make the roster there.”

Shackelford said he is eager to join the organization that has garnered national headlines recently with the free agent signing of former New England Patriots quarterback Tom Brady and the subsequent trade for former New England tight end Rob Gronkowski.

“It seems to me like they have a good organization,” Shackelford said. “Obviously over the past week you’ve been hearing a lot of buzz about them. The offensive line coach (Joe Gilbert) called me and said I have an opportunity to compete for a roster spot. It was the best option for me, and I couldn’t pass up that opportunity, so it was just a combination of all of those things. I’m just ready to get started.”

Once he inks his deal, Roach will be the third former Texas player on the Saints’ preseason roster, joining defensive tackle Malcom Brown and wide receiver Lil’Jordan Humphrey.

“The Saints showed a lot of interest in me while the draft was going on,” Roach said. “They only had about four picks and ran out of picks, but it’s somewhere I’ve dreamed of playing all my life. I talked to the defensive coordinator and the d-line coach, and all of their coaches were calling me going through the schemes and everything like that. I feel like it was the best decision for me, going to a team that really wanted me to come there and getting an opportunity to make the roster. I’m thankful for that and thankful to be coming back home.”

A native of Baton Rouge, Roach started 23 of 47 games in which he played as a defensive end or linebacker at UT, including 12 starts in 13 games in 2019. As a senior, he had 40 tackles (24 solo), nine tackles for loss, three sacks, three quarterback hurries and one blocked kick.

“(Roach is) a captain and I think that says something,” Texas head coach Herman said. “Malcolm is very respected by his peers. He has tremendous speed and strength for a guy his size. His 40-yard dash time at the combine didn’t surprise us. It wasn’t because he went to some guru or trainer for two months to train for the combine. That’s just who he is and who he has been for us. He’s extremely strong and versatile. He can play in a 3-4 and a 4-3. He can play a 3-technique or a 4-technique. Malcolm’s a fun-loving guy. He knows when to turn the switch on to work, but when it’s time to have a good time, Malcolm’s going to have a good time, too. He really relates to everybody on the team.”

Shackelford started 40 of 43 games at UT, including starts in all 13 games in 2019, and was a semifinalist for both the William V. Campbell Trophy and Senior CLASS Award.

“Shackelford is as smart of an offensive lineman as I’ve been around,” Herman said. “He made all the calls for our offensive line. He’s a self-starter who is extremely strong and powerful, and just really knows how to play to his strengths. He knows what his strengths are, and he knows what his weaknesses are. He’s a guy that gets the entire offensive line going in the right direction. He’s athletic enough to move around a little bit, but strong and powerful enough to where if you put a 330-pound nose guard on top of him, he’s going to be able to hold his own against him.”

Shackelford’s agreement with the Buccaneers means that all five Texas captains will head to training camp with NFL teams. Safety Brandon Jones and receivers Devin Duvernay and Collin Johnson were drafted by the Miami Dolphins, Baltimore Ravens and Jacksonville Jaguars, respectively.

“I think it’s no secret why these guys have risen to the status that they have and elevated their games to the level that they have,” Herman said. “It’s because of their work ethic and their leadership. They were all five captains, and that doesn’t just happen by accident. We vote on our captains as a team, so they have the utmost respect from their teammates, not just from a productivity standpoint, but from a work ethic standpoint, and a leadership standpoint.”