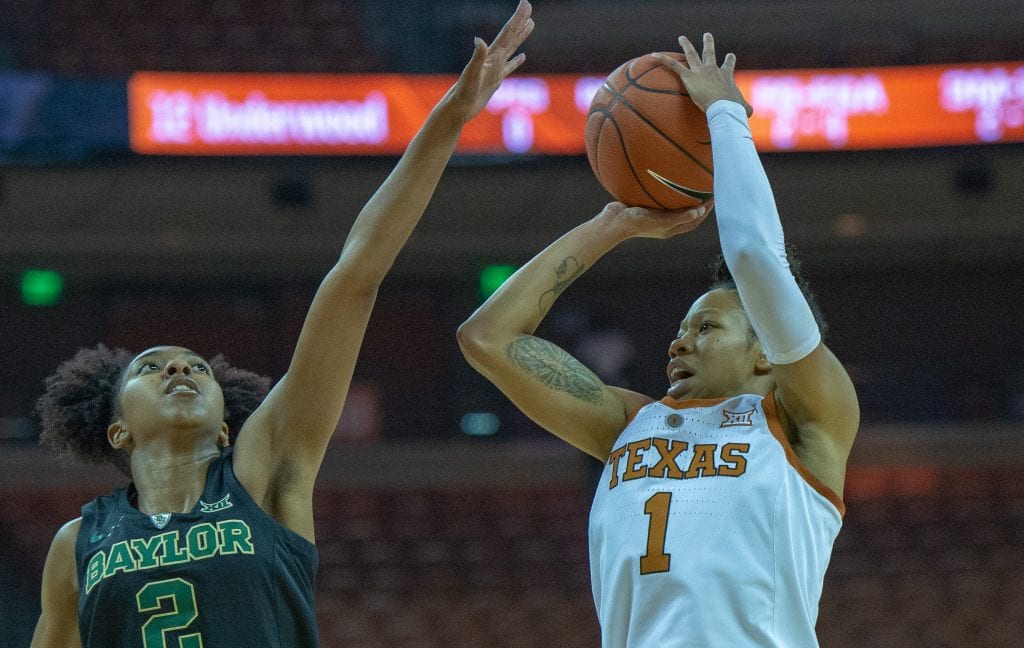 AUSTIN, Texas — No. 12 Texas women's basketball head coach Karen Aston doesn’t believe in moral victories. But the confidence, determination and grit that the Longhorns showed when they mounted a late comeback against Baylor, the Big 12’s perennial power and the current No. 1 team in the country, gives her optimism about how far this year’s squad has come since October and how far it could possibly go in March.

“You’re never rewarded when you lose,” Aston said. “There’s really a bottom line to that. But I do think that they need to hear something really positive from me. There was some really good things in this game. We’ve got to worry about Texas right now, and how can we peak at the right time. So I think we’ll take some good things out of this game.”

In a game that easily could have ended in a blowout, Texas mounted a late comeback against the top-ranked Bears, only to fall short and eventually lose, 74-68, in front of a crowd of 5,393 Monday evening at the Erwin Center.

Down by 19 with 2:32 to play in the third quarter, the Longhorns (18-5 overall, 8-3 against Big 12 opposition) closed the gap to seven points with with 2:53 to play after senior guard Danni Williams scored eight straight points, including two three-pointers for the 'Horns. Texas closed to within four points of the Bears with 0:30 to play, but was unable to close the gap.

“The fourth quarter really just showed how much heart we have,” junior guard Sug Sutton said. “We were down by a lot, so to get back in the game shows a lot about our team. We’re just going to learn from it and get better from it.”

Baylor coach Kim Mulkey said she noticed the Longhorns’ tenacity in the final minutes of the game, as well.

Sutton and Williams each scored a team-high 19 points. Sutton converted on 7-of-15 from floor and added six assists in 38 minutes. Williams, a graduate transfer who previously played at Texas A&M, connected on 7-of-13 attempts, including a 5-of-8 clip from three-point range, while also chipping in six rebounds and five assists.

The Bears (20-1 overall, 10-0 against Big 12 teams) were led by sophomore guard Moon Ursin, who had a career- and game-high 20 points, along with five rebounds and one assist, off the bench. At times it appeared like Ursin controlled the entire game as she scored points from a variety of spots on the court and picked up two steals.

“Lots of credit to [Baylor],” Aston said. “They’re a really good basketball team and you pick your poison with them. I thought we did a pretty good job with their bigs, but Moon [Ursin] was obviously the difference in them.”

Baylor has won 19 of its last 20 meetings against Texas.