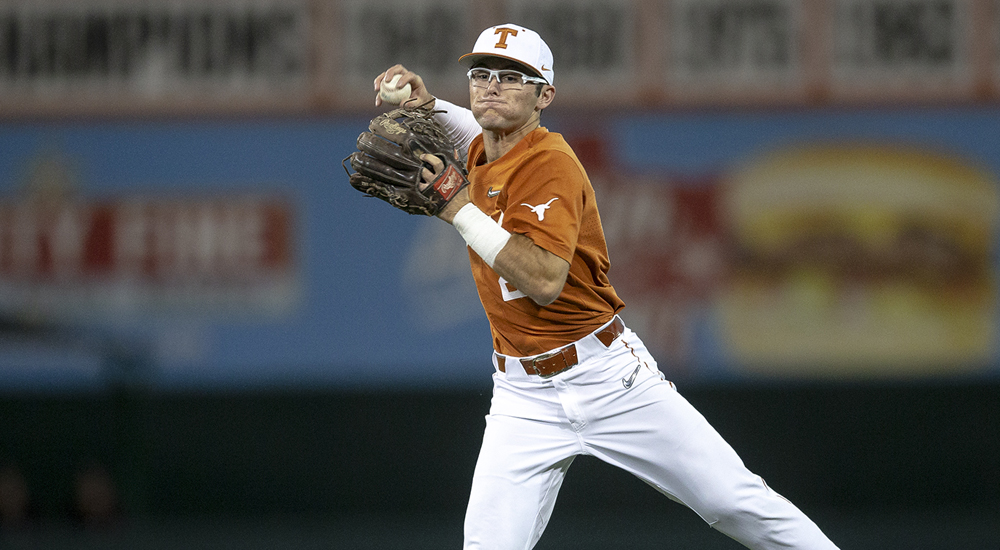 Second baseman Lance Ford had three hits, but the Longhorns committed five errors in their 11-10 loss to Oklahoma State (photo courtesy of texassports.com).

STILLWATER, Okla. — The No. 19 Texas baseball team took a lead into the top of the ninth inning, but five UT errors were too much to overcome, as Oklahoma State rallied for an 11-10 victory to claim a three-game sweep over the visiting Longhorns.

In the three-game set, the Cowboys outscored their guests, 36-12.

Texas head coach David Pierce got plenty of work Sunday … on trips to the mound, as 10 different pitchers took the mound for the Longhorns. Starter Ty Madden only worked two innings, allowing one hit and a single earned run. Redshirt junior Donny Diaz, UT’s ninth hurler of the evening, absorbed the loss.

Texas jumped out to a 2-0 lead in the first inning, when Zubia smacked a double to center, driving in shortstop Masen Hibbeler and Todd. OSU tied the game with single runs in the first and third, before UT pulled ahead again in the forth on an Ellis single to left-center field that scored Ford.

Again the Cowboys tied the game, with an RBI single in the bottom of the fourth, and again the Longhorns responded. UT scored two in the top of the sixth inning, when Ford and catcher Michael McCann scored on back-to-back RBI groundouts to shortstop by Kennedy and Todd. This time, however, OSU did more than just catch up, scoring six times in the bottom of the sixth to take a 9-5 lead.

But the see-saw nature of the game continued. Shaw drilled a two-run home run in the top of the seventh, scoring third baseman Ryan Reynolds to close the deficit to 9-7. An Ellis single up the middle and a Kennedy sacrifice fly scored Ford and McCann, respectively, knotting the score again at 9-9.

Texas took the lead in the top of the ninth inning, when Ellis scored on a sacrifice fly to right by Todd, but OSU responded again in the bottom of the ninth, getting the tying run when pinch runner Noah Sifrit scored on a wild pitch and the winning run on shortstop Andrew Navigato’s RBI single to center, which scored second baseman Hueston Morrill.

The Longhorns, who have lost four of the last five, will try to get back on track Tuesday, when they head to San Marcos to take on Texas State at 6 p.m.