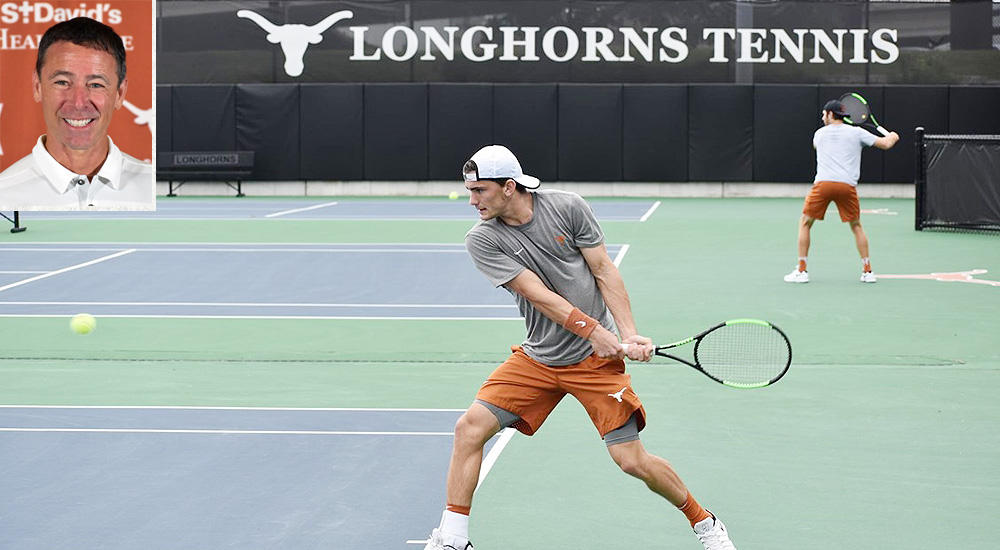 Bruce Berque (inset) took over in March as interim head coach of the University of Texas men's tennis team, and has guided the Longhorns to a 26-3 record, the No. 2 spot in the national rankings and a berth in the quarterfinals of the NCAA Championship (photos courtesy of texassports.com / graphic by Horns Illustrated).

AUSTIN, Texas — Coaches and athletes often are, to a degree, creatures of habit. Some are creative and like to think and do some things that are a little outside the proverbial box, but more often than not, they like to develop a routine and stick with it. Some will focus on getting the same amount of sleep, or eating the same meal the night before a game or match, getting into the weight room at the same time, or even something as trivial as lacing one shoe before the other. Coaches and athletes strive to find what works for them, and then clinging to that routine as if it holds their only opportunity for additional breaths of air.

That is precisely what Bruce Berque has done this season has been so extraordinary. Berque replaced Michael Center as UT’s men’s tennis head coach March 12; at the worse, the team has not missed a step … and the argument can be made that the Longhorns are playing their best tennis of the season.

That Berque is leading Texas to a successful season is no surprise; he is, after all, a proven veteran coach who has coached at several schools, including as head coach at the University of Michigan, and he has produced unquestioned results, including two NCAA singles champions and four NCAA champion doubles pairs. In addition, he took over a Texas team loaded with talented players — many of whom he helped recruit as a UT assistant coach.