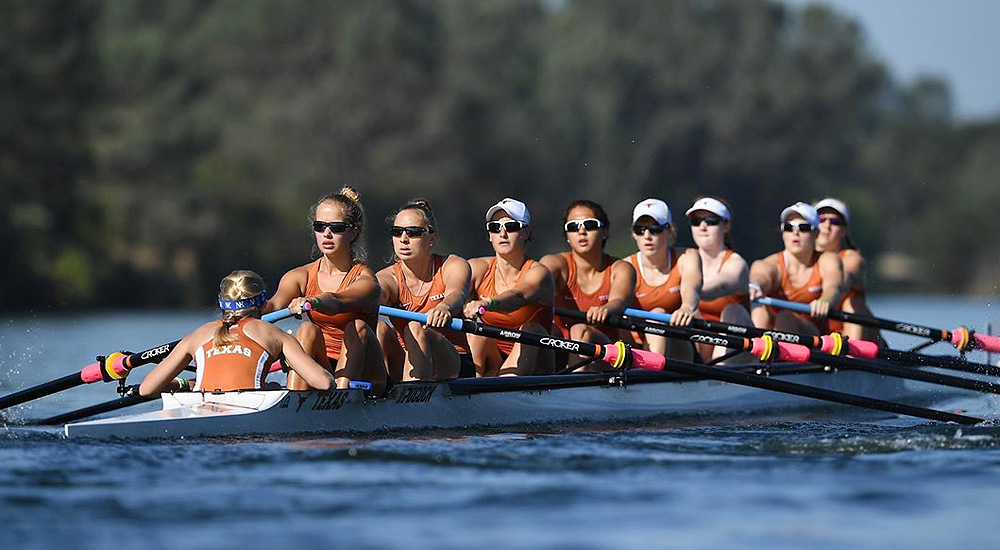 Just two weeks shy of competing in the Big 12 Championship, the No. 4 University of Texas rowing team picked up a huge victory by sweeping four races against No. 6 Ohio State (photo courtesy of texassports.com).

COLUMBUS, Ohio — The No. 4 Texas rowing strengthened its status as one of the nation’s elite teams Friday by sweeping all four races against No. 6 Ohio State in Columbus.

The victory over the Buckeyes, Texas head coach Dave O’Neill said, is an indisputable measuring stick for the Longhorns.

“Winning these four races against Ohio State on their home course is certainly a big accomplishment,” O’Neill said. “We have a ton of respect for their program, and today shows the progress we've made.”

In addition to racing each other, the teams had to contend with the elements. The Longhorns and Buckeyes were scheduled to race Saturday, but forecasts calling for foul weather prompted race officials to move the event to Friday.

“Today was another race where we had to adjust to a new schedule with only a few hours’ notice,” O’Neill said, “and I’m glad we made the most of it.”

“The first eight has made some good improvements, and they showed some decent speed today,” O’Neill said. “Another standout performance was by the second four. They established a solid lead early and never let up. They pushed to the very end, and that result was certainly noticed.”

The Longhorns will return to the water May 19 when they travel to Oak Ridge, Tennessee to race in the Big 12 Championship. In addition to traditional Big 12 rivals Oklahoma, Kansas, Kansas State and West Virginia, the conference includes Alabama and Tennessee as affiliate rowing programs.