DALLAS, Texas — No one will ever forget the 116th rendition of the AT&T Red River Showdown, but Saturday’s game sure looked like one Texas fans wanted to pretend never occurred for three-and-a-half quarters.

In the end, Oklahoma made the final big play to secure a thrilling 53-45 win over No. 22 Texas in the Cotton Bowl in Dallas in a game that took four overtimes and every bit of energy and gumption from every player on the field to decide.

Texas looked dead in the water after a lackluster performance in the first 26 minutes of the second half but climbed off the deck to force overtime. The Longhorns then breathed a sigh of relief when Oklahoma missed a potential game-winning field goal in the third extra period and slugged it out to the end before succumbing.

The winning touchdown came on a 25-yard pass from OU’s Spencer Rattler to Drake Stoops in the fourth extra period. Rattler added the two-point conversion, which is mandatory after the second overtime, to Theo Wease to push the Sooners’ lead to eight points.

Texas tried to answer, as it had down the stretch and in the first three overtimes, but quarterback Sam Ehlinger was intercepted in the end zone by Tre Brown, ending the nearly five-hour dustup that left both teams with identical 2-2 overall records and a 1-2 mark in games against Big 12 opponents.

The Sooners snapped a two-game losing streak despite making myriad mistakes, including using a too-conservative approach with the lead in the fourth quarter. Rattler, who was benched in the second quarter, ended up with 209 passing yards and three touchdowns passing and 51 yards and another rushing score in the win.

Ehlinger countered with 399 yards of total offense, 287 yards and two touchdowns (and two interceptions) passing and 112 yards and two more scores on the ground on 23 carries. His performance was nearly otherworldly, but still not enough to overcome UT's many mistakes.

The Longhorns dropped their second straight game and likely will tumble out of the top 25.

“We've got a solid core of leaders that do things the right way,” Texas coach Tom Herman said, “and we know we are deficient in certain areas and we're going to continue to get those areas better — either that or find replacements for those that we can get better. That'll be job No. 1 moving forward this week.”

One thing that has to be said about this Texas team: it’s one you can't take your eyes off until the final seconds of a game.

“We are a good team, but we always seem to make plays at crucial times,” Ehlinger said. “We showed the kind of football team that we are there at the end when we get out of our way and stop the penalties and a lot of different things, the mistakes that are self-inflicted.

"It's unfortunate, but we’ve got to get better.”

At the risk of being repetitive: the Longhorns waited until the final four minutes of regulation and overtime to play their best. Those who are prone to a fluttering heart or inclined to leave or turn off the broadcast of a game before the final play might find following Texas too much to handle.

The Longhorns completed the comeback two weeks ago against Texas Tech, but could not against the Sooners.

“I don’t think the problem is talent,” Texas defensive tackle Ta’Quon Graham said afterward. “It’s a lack of discipline and execution — those things go hand in hand. We need to do that on a consistent basis. I don’t see the season slipping away from us. As one of the leaders on the team, it’s my job to keep the guys' heads on straight and know that there's more games to play.”

Oklahoma outgained the Longhorns, 469-428, but the two heavyweights threw haymaker after haymaker down the stretch. After the way in which Texas played over the first three-and-a-half quarters, it’s amazing that UT was able to make such a great game out of it.

Texas trailed by two touchdowns with 4:38 to play before Ehlinger willed the Longhorns to within 31-24 via a gutsy 50-yard drive that ended in a 9-yard touchdown pass to Joshua Moore.

After a failed onside kick, the Texas defense held, giving the Longhorns one more chance with 84 yards to move and 1:52 to make magic happen ... and they did, with the tying score coming on a 2-yard pass from Ehlinger to Keaontay Ingram with 14 seconds left than stunned the Sooners and sent the game into overtime.

Texas got the ball first in the extra period and efficiently drove to the lead score in five plays, the final of which was a 3-yard touchdown run by Ehlinger. It was the first time the Longhorns led in the game, but that advantage was short-lived.

Oklahoma tied the game with a 11-yard touchdown pass from Rattler to Austin Stogner on a crucial third-down throw to send the game into a second overtime.

Rattler bashed his way into the end zone from a yard out on fourth down on the Sooners’ possession in the second extra period to push OU back in front. Ehlinger then hopped, skipped and jumped his way through the Oklahoma defense for a 25-yard touchdown run to tie the game at 45 and secure a third overtime.

Texas was forced to settle for a 33-yard Cameron Dicker field goal attempt in the third overtime but the try was blocked by Perrion Winfrey, giving the Sooners a chance to win the game with any score.

Oklahoma opted to run four plays, moving to the UT 11-yard-line before Gabe Brkic lined up for a 31-yard field goal attempt for the win. But Brkic pulled the kick badly to the left, necessitating a highly unlikely fourth overtime.

Ultimately, the Sooners found a way to win.

Things started choppily for Texas. Ingram fumbled on the Longhorns’ second offensive play — remember that Ingram’s fumble on the goal line in the final minutes against TCU allowed the Horned Frogs to finish off the upset of Texas last week – and the Sooners capitalized with a 19-yard field goal by Brkic at the end of a nine-play, 58-yard march.

Oklahoma expanded its advantage to 10-0 with 6:47 to play in the first quarter as Rattler stepped up in the pocket and hit a wide-open Marvin Mims for a 30-yard touchdown pass.

An interception and 27-yard return by DeMarvion Overshown on the final play of the first quarter gave Texas a chance in the red zone. On third down, a 15-yard scramble by Ehlinger was all but wiped out by a personal foul penalty by UT’s Derek Kerstetter and forced the Longhorns to settle for a 27-yard field goal by Dicker that cut the OU lead to 10-3 with 13:40 to play in the second quarter.

Rattler’s fumble on OU’s ensuing possession, which was forced by T’Vondre Sweat and recovered by Juwan Mitchell, gave Texas another short field at the Sooners’ 19-yard line. The Longhorns capitalized with Ehlinger’s 6-yard scoring run on the snap after a defensive pass interference flag, allowing Texas to tie the game at 10-10 with 11:44 left in the second quarter.

A blocked punt by Oklahoma’s David Ugwoegbu set the table for a 7-yard touchdown run by Marcus Major and a 17-10 Sooners lead midway through the second quarter.

But that didn’t last long as Ehlinger engineered the Longhorns’ best drive of the half, marching the team 75 yards on eight plays and capping off the push with a 2-yard touchdown run that again knotted the contest.

The Sooners reclaimed the lead early in the third quarter on a 2-yard touchdown plunge up the middle by T.J. Pledger after a 36-yard punt return by Mims and an unsportsmanlike conduct penalty on Texas punter Ryan Bujcevski.

Oklahoma then added another Pledger touchdown run, this one from 1 yard away, at the end of an impressive 17-play, 87-yard drive that chewed up 8:07 of the third quarter. Only four plays on the march were for more than nine yards, and none were for more than 16 yards.

The Texas offense was dormant until it absolutely had to wake up, but the Longhorns’ defense did yeoman work to keep things close, holding the Sooners to 60 yards and punts over their next three possessions.

The Longhorns now get plenty of time to address their concerns and decide if they are going to be the team many projected them to be. Texas has an off week before hosting Baylor Oct. 24 – and that’s if the Bears get to play because they have suspended football activities because of a breakout of Covid-19 in Waco.

“We’ve got an opportunity to still have a really, really good season,” Herman said. “We know we've got a long, long way to go. We got a lot to clean up but we've also got a lot of our season left ahead of us, and we're going to use this bye week to continue to teach, continue to simplify and then hopefully heal up and be ready to go.” 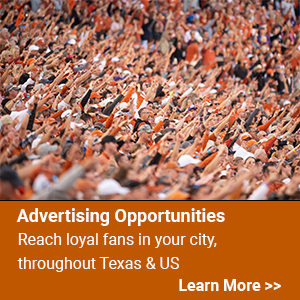