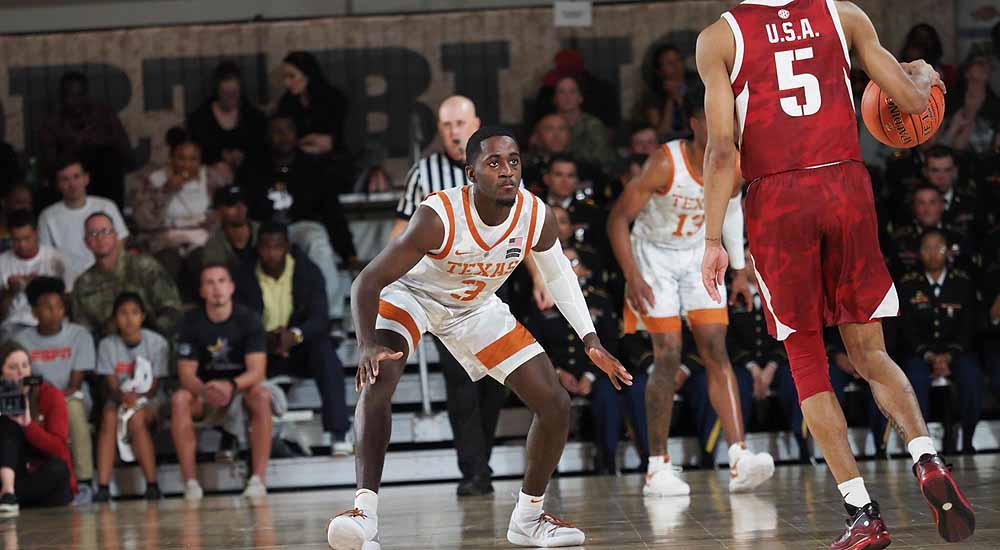 Guard Courtney Ramey has become invaluable to Shaka Smart and his staff, ranking among the team's leaders in steals and assists (photo courtesy of texassports.com).

“We just have to be more consistent,” Smart said at the Big 12’s Media Days. “If you want to compete and be at or near the top of this league, you have to win those close games where you’ve played well enough to put yourself in position to win, now you just have got to bring it home.”

Those opportunities, like contending for the Big 12 title, will only come their way if the Longhorns can remain confident, calm and consistent. Texas will be challenged in conference play this season, but the goal of winning a Big 12 title remains consistent for Smart and his team. In a league with a lot of competition, such as No. 3 Kansas, 2018 national runner-up Texas Tech and No. 16 Baylor, Texas will be ready for hard-fought games with some of the top teams in the country. The toughest stretch will be Feb. 3-10, when the Longhorns square off against Kansas, Tech and Baylor in consecutive games.

In addition, the Horns’ strength of schedule is boosted by a quality non-conference schedule during the first two months of the season, a slate that includes early-season games against Purdue (a team that made it all the way to the Elite Eight last season), Georgetown and either Duke or Cal in the Empire Classic. In addition, they take on Texas A&M in the Lone Star Showdown Dec. 8 in Fort Worth in a nationally televised game.

Smart said he believes the backcourt of guards Courtney Ramey, Matt Coleman and Jase Febres will be the foundation of the 2019-20 team. Known for their quickness and accuracy from beyond the arc, each of them is greatly improved in the shooting category this season, according to Smart, whose team made the most threes in the league last year.

“We have Jase Febres coming back, who we think is as good a shooter as any in the league,” Smart said, “along with Courtney Ramey, who made a lot of shots last year as a freshman and Matt Coleman, who improved his shooting percentage from outside by four points from his freshman to his sophomore year.”

The three have combined to make a trio that can beat teams pretty much anywhere on the floor.

Coleman, who was tabbed the starting point guard last season, has increased his level of leadership on and off the court as he comes in to his junior season, looking to add to the momentum with which he finished last season. With the ball in his hands a lot, Coleman’s decision-making skills will be key throughout the season.

He will be aided by Ramey, who played in every game last season and made 20 starts while leading the team in three-point percentage. With his keen vision he posted phenomenal stats in assists (114 last year, which ranked second on the team) and steals, with 33 last year to finish third on the roster.

“Those two are as different as night and day,” Smart said as he talked about Coleman and Ramey. “I think both of those guys have the capability to be strong leaders on our team and they’re both going to have the ball in their hands a lot. So their ability to affect positive change in their teammates is going to go a long way.”

The tallest of this backcourt group at 6-5, Febres has the biggest knack for knocking down shots from deep range and proved it time and time again last year, leading the Longhorns in three-pointers (89) and three-pointers attempted (239) and ranking second on the team with a three-point shooting percentage of .372. In one of the Longhorns’ best games of last season, Febres hit 8 of 10 threes against Iowa State, the most of any UT player since A.J. Abrams connected on 8 of 15 from long range in 2008.

This backcourt will be a firm foundation for the Longhorns as they begin the upcoming season. But Smart said the team will need more than sharp shooting from the backcourt to reach its goal of returning to the NCAA tournament and the players to get the job done, it is just a matter of consistency and hard work from the entire group in order to be successful and reach new heights.

“Anything that you do in life that’s worth doing is going to be hard,” said Smart. “I think for our guys, it’s embracing that fact and then attacking it and doing it together and that’s the power of team sports.”