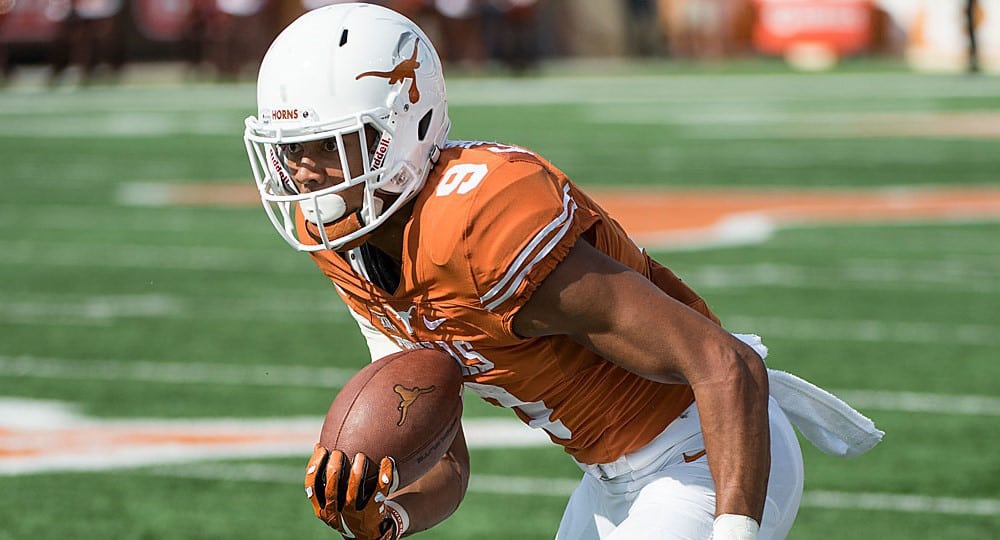 Wide receiver Collin Johnson had seven receptions for 124 yards and a touchdown in the Texas football team's 31-16 victory over No. 17 TCU (photo courtesy of texassports.com).

AUSTIN, Texas — If the Texas Longhorns’ back-to-back victories — UT beat No. 17 TCU, 31-16, Saturday at No. 17 TCU at Darrell K Royal-Texas Memorial Stadium a week after knocking off then-No. 22 USC — prove to be a statement that the Longhorns are back, there will three aspects from those games that head coach Tom Herman can use to illustrate the rise.

One is the swagger and overall brilliance of the Texas defense, which has ruled the second half the past two weeks. Another is the leaps-and-bounds improvement of quarterback San Ehlinger, who in three weeks has morphed from mistake-prone in the clutch to cold-blooded closer.

The third is the fun factor that comes with playing loosely and with confidence and embracing pressure than shrinking from it.

Ehlinger passed for 255 yards and two touchdowns and ran for another score and the Longhorns took advantage of four turnovers in the Big 12 Conference opener for each team.

Suddenly, a Texas team that floundered in the swamps of Maryland in a season-opening loss to the Terrapins and struggled to put away a bad Tulsa team in its second game has defeated ranked teams in back-to-back weeks for the first time since 2008.

“All this does is validate the fact that we have taken another step. That’s all,” Herman said after the win, which was accomplished before a crowd of 95,124. "We have got many, many, many more steps to take.

The Longhorns (3-1, 1-0 in games against Big 12 opponents) beat TCU for the first time since 2013, former coach Mack Brown’s final season at Texas, by playing mistake-free football and scoring the game’s final 21 points after being down 16-10 in the waning seconds of the third quarter.

It also is the first time since 2014 that the Longhorns have won three games in a row.

TCU quarterback Shawn Robinson threw for 197 yards and a touchdown and ran for 57 yards but threw two interceptions and had a fumble, with two of the turnovers resulting in Texas touchdowns.

The loss denied the Horned Frogs (2-2, 0-1 in Big 12 games) a fifth consecutive win over Texas, something they still never have accomplished in 89 meeting between the two Lone Star state rivals.

“That’s two games in a row that we’ve lost big in the turnover department,” TCU coach Gary Patterson said. “It’s going to be hard to win ballgames if you do that. You can’t give up the big play. When you are on the road you have to take ballgames.”

TCU, employing its quick-tempo attack, took the opening kickoff and marched to a 46-yard field goal by Jonathan Song and a 3-0 lead.

The Longhorns responded with a nice drive of their own, with a big chunk coming on a 45-yard pass from Ehlinger to wide receiver Collin Johnson, but couldn’t convert as freshman kicker Cameron Dicker’s 42-yard field goal try was low and wide left.

Texas took the lead on its next possession, using 12 plays to move 65 yards — the drive stayed alive when UT converted a fourth down near midfield with a pass from Ehlinger to Johnson — to move to a 3-yard touchdown run by Tre Watson. The score granted the Longhorns their first lead over TCU since 2013.

Robinson’s 50-yard bomb to Jalen Reagor over Texas cornerback Kris Boyd to the Texas 4-yard line put the Horned Frogs back deep into the red zone, but on third down, Boyd batted away a fade pass to Reagor in the end zone to force TCU to settle for a 23-yard Song field goal.

The Longhorns took advantage of a short field after a 26-yard TCU punt to move 30 yards in seven snaps to a 34-yard field goal by Dicker that pushed their lead to 10-6 with 10:10 to play in the second quarter.

TCU took a 13-10 lead into halftime when Robinson targeted Boyd again, this time on a back-shoulder pass to Reagor for a 1-yard touchdown with 6 seconds to play in the half. Robinson did most of the damage on the drive with his legs, gaining 25 yards of the 41 needed to get to paydirt with runs.

The halftime statistics were nearly even, with TCU owning a 170-167 edge in total yardage while the Longhorns had 115 passing yards to 108 for the Horned Frogs. TCU was 3-for-8 on third-down conversions, while Texas was 0-for-6.

The Horned Frogs added to their lead with a 29-yard field goal at the 8:44 mark of the third quarter after a seven-play, 40-yard drive.

Ehlinger stood tall in the pocket under duress and threw a strike between two defenders to a diving Collin Johnson for a 31-yard touchdown and the 17-16 lead with 45 seconds to play in the third quarter.

Robinson then made another mistake, throwing his second interception (and committing his third turnover) of the game when freshman Caden Sterns picked off a pass across the middle and returned it 33 yards to the TCU 2-yard line. Ehlinger scored on a 2-yard run on the ensuing snap and just like that the Longhorns led 24-16.

The Longhorns cemented the win with a stirring six-minute drive, moving 76 yards in 10 plays to Ehlinger’s 38-yard scoring strike to Lil’Jordan Humprhey with 3:18 to play.

“We knew what a lot of these guys were capable of,” Herman said about his players. “It seems as of different guys step up each week and we’re finding out more and more about our guys each and every week.

“I really like the grit of this team and the tenacity that they have shown, especially in the past couple of weeks.”

Texas returns to the field Sept. 29 when it travels to Manhattan, Kan., to face the Kansas State Wildcats.