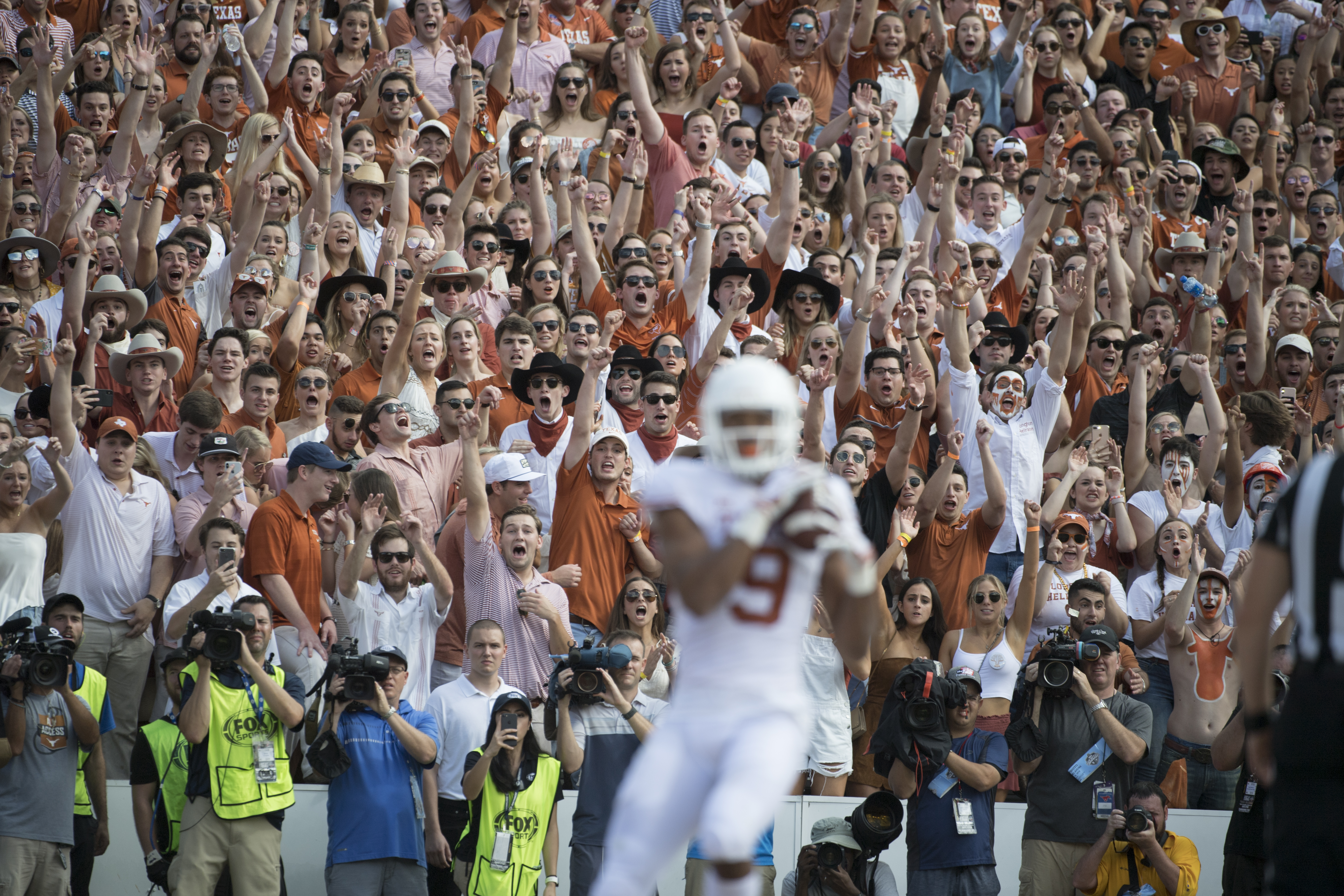 Collin Johnson shined in last year's Red River Showdown, and all eyes will be on him again as he returns to the field after a multi-week absence due to injury (Photo courtesy of Texas Sports).

AUSTIN, Texas – It's almost showtime for the Red River Showdown.

No. 11 Texas (4-1, 2-0 in Big 12 play) heads to Dallas for the latest rendition of the Red River Showdown. Always anticipated, the annual battle for the Golden Hat vs. No. 6 Oklahoma in the Cotton Bowl on the Texas State Fair Grounds is set to start 11 a.m. Saturday.

It’s the biggest game of the year for both teams, at least until they play, if they play, in the Big 12 Championship in December.

Here are a few of the players and the game strategy that we will be watching for against the Sooners (5-0, 2-0 in Big 12 play) :

Ehlinger has played well this season, as one would expect from the Longhorns’ unquestioned leader and a erstwhile Heisman Trophy candidate. He will have to play even better, if that’s possible, if he expects to match up with his Oklahoma counterpart Jalen Hurts, the Alabama transfer and front-runner for player of the year after five games. 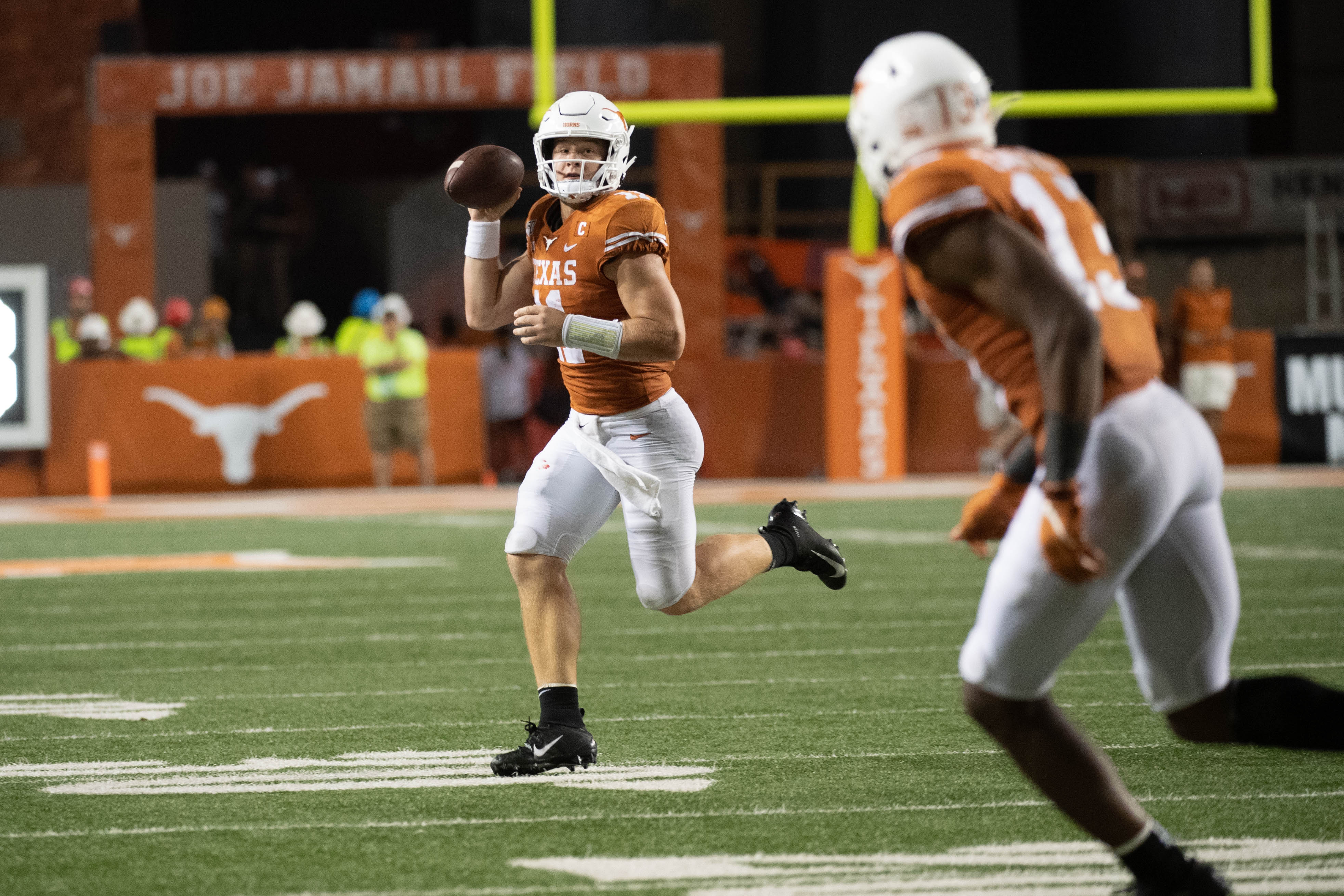 Johnson has missed the past three contests with a hamstring injury and has been cleared to play against the Sooners. Texas will need Johnson’s experience and big-game savvy to rise to the occasion if it’s going to beat Oklahoma, but he’s had those kinds of games before.

Johnson set a Big 12 Championship Game record with 177 receiving yards against Oklahoma last season, and he has a reception in 29 straight games played, the fifth-longest streak in school history. Texas was not able to connect with its outside receiver with the regularity it needed in last week's win at West Virginia. Having Johnson back on the field will help the Longhorns open up that part of their attack.

“I’m excited just to see (No.) 9 back on the field,” Texas offensive coordinator Tim Beck said. “That’s going to be good. I know Sam feels the same.” 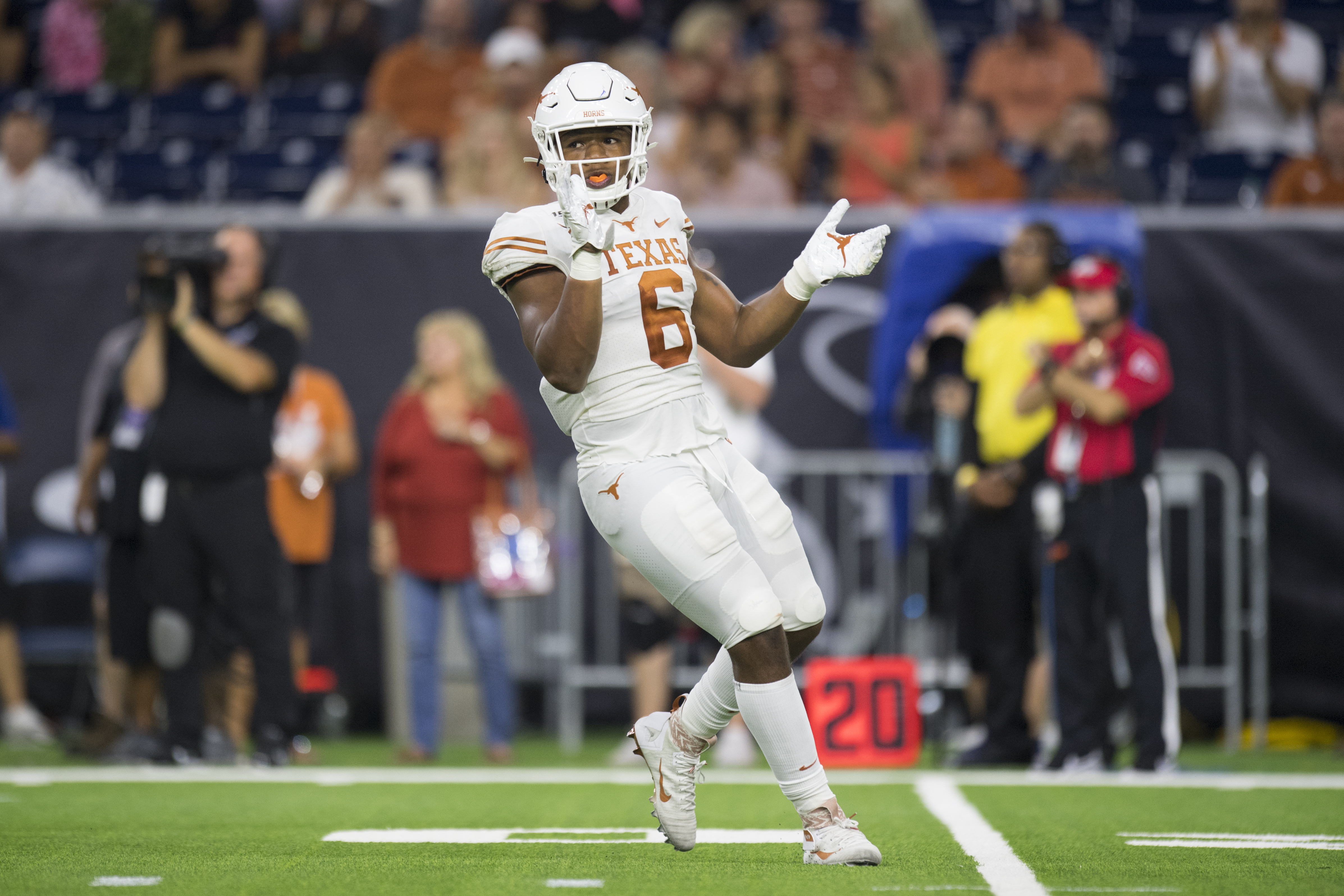 The Texas defense went without a sack last week against West Virginia and needs to get more pressure on Hurts this week to disrupt the talented quarterback. All the while the Longorns also need to pay strict attention to the Sooners prodigious running game. Pencil in Mitchell to be the man to get both those jobs done, perhaps as a spy on Hurts and as a run stopper when needed.

“Juwan’s played football his whole life, and some people got to him really early in his career and taught him about the game,” Texas defensive coordinator Todd Orlando said. “We’re kind of receiving the benefits of that.”

Mitchell is tied for the team lead in sacks with two and has 13 tackles on the season despite having played in just four games.

Huge games need players to come up huge, and no time is like the present for Jones, who has been steady if not spectacular over Texas’s first five games. Yes, he is tied for the team lead in tackles with 29, is tied for the top in pass breakups with three and is third in tackles for a loss with three (for 13 yards in losses). But even more was expected out of Jones this season, who came back for his senior year to be a real force for the Longhorns in the secondary.

Jones has had to tutor some of the Longhorns’ younger defensive backs, and he’s excelled at making sure everyone has been lined up in the right spot to make plays. Now, it’s time for Jones to make a few of his own. 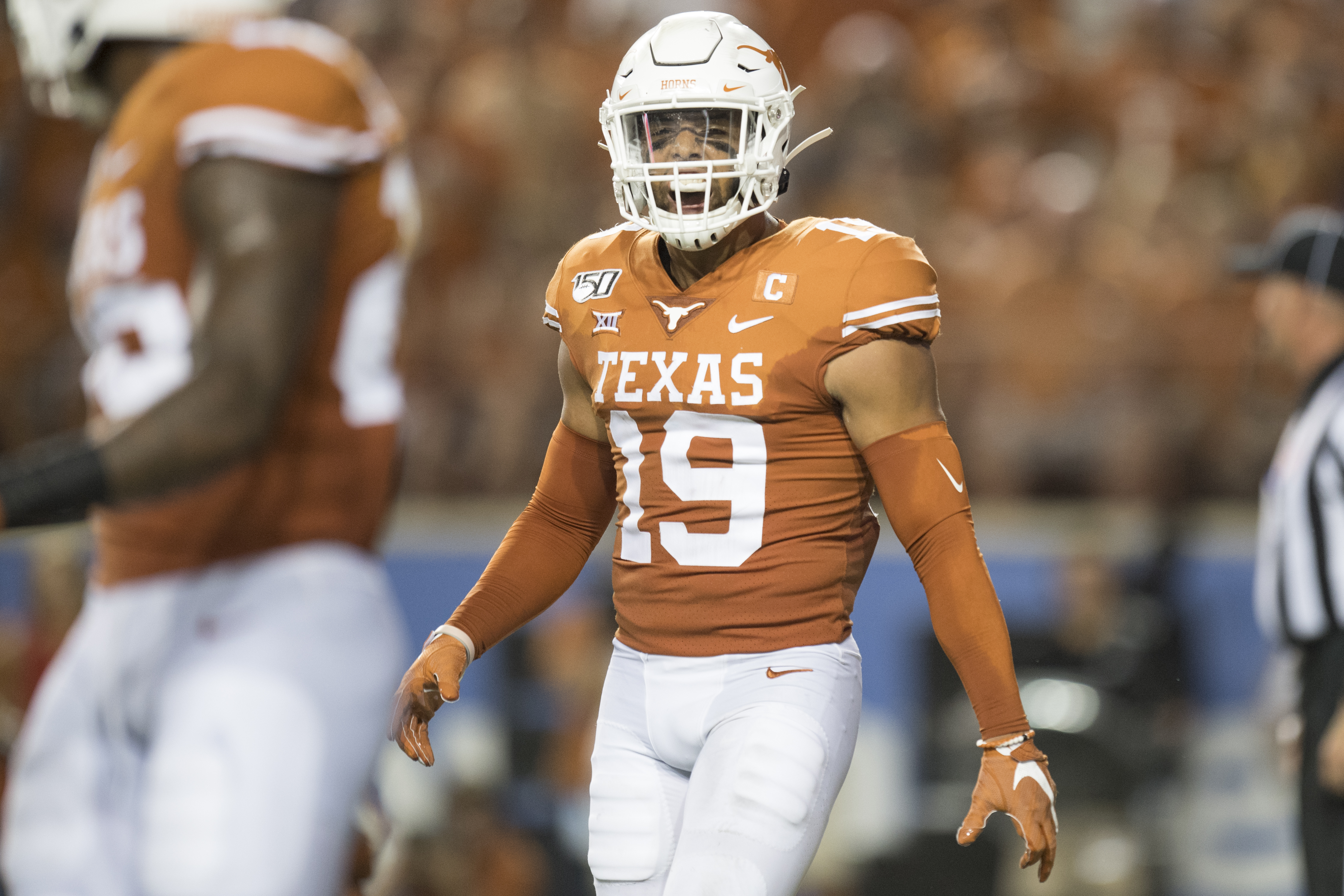 The key to the 2019 Texas-OU showdown is the Longhorn defensive front six against Oklahoma’s banged up offensive line.

“We’ve got to get better at getting after the quarterback,” said Orlando about the need to live in the Sooners’ backfield on Saturday. “It’s been addressed because we do have some really dynamic guys, and we expect more out of them.”

The Sooners will be without both their starting offensive tackles against Texas, so expect Orlando to dial up some blitzes to shake up their replacements to get to Hurts. 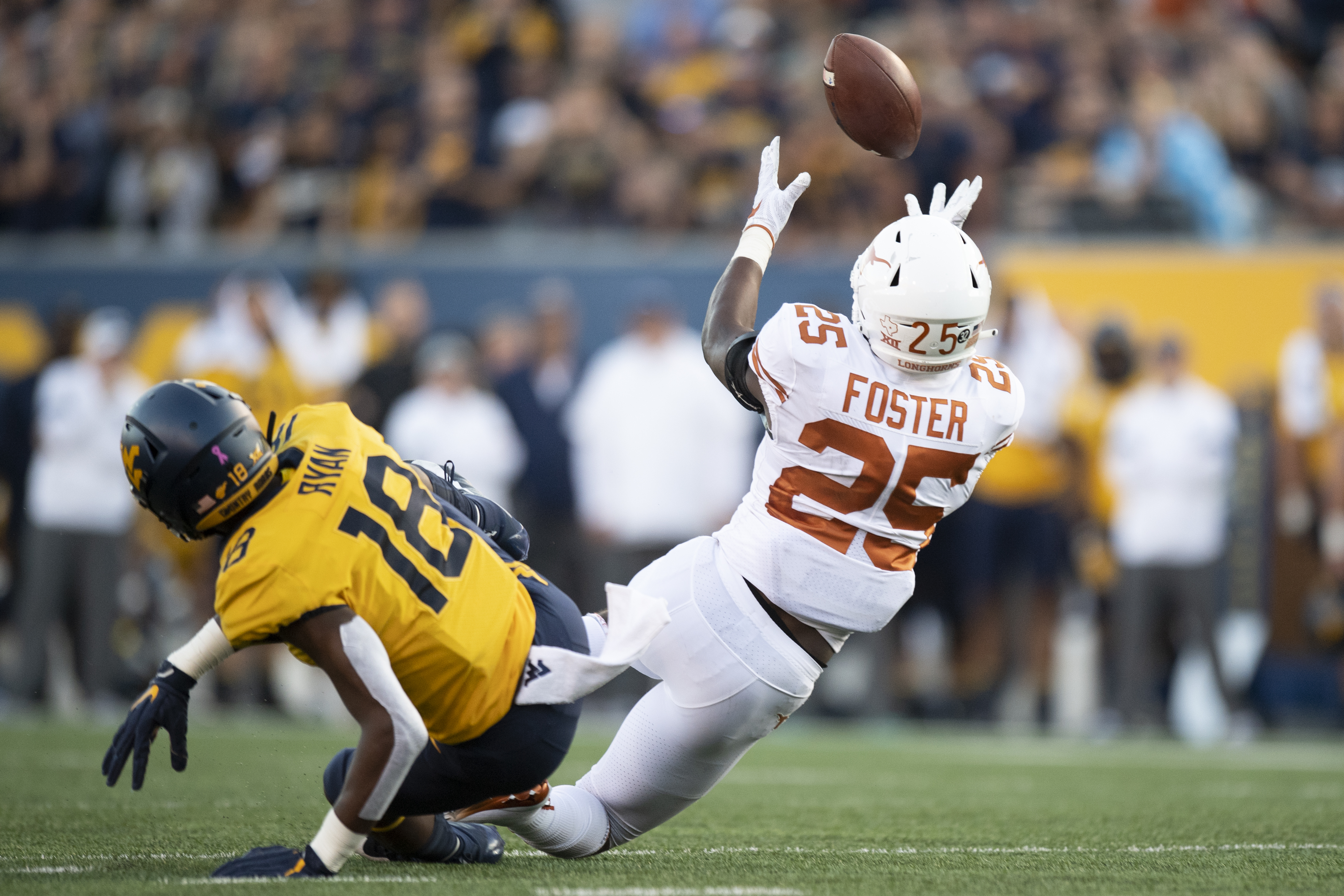 There’s nothing like the Texas-OU game in college football, and if there’s an edge for Ehlinger over Hurts as far as an intangible, it’s that Ehlinger has played four times against the Sooners and Hurts has never faced the Longhorns..or the challenge of what he’ll see in the Cotton Bowl on Saturday.