Texas took the Trojans down Saturday 37-14 in front of a record crowd at DKR-Memorial Stadium (photo courtesy texassports.com).

Playing loosely and confidently, the University of Texas football team hooked its 900th win in program history Saturday night and let its considerable talent come fully to the forefront in a 37-14 win over No. 22 USC.  The Longhorns rode a solid performance from quarterback Sam Ehlinger before a stadium-record crowd of 103,507 Burnt Orange fans at Darrell K Royal-Texas Memorial Stadium, and a defense that looked dominant in engulfing the Trojans attack.

If the Longhorns were looking to send a message to the college football world about their potential and how far they may have come in the 16 games since Tom Herman took over as coach, this was a win that was a great first step. A stifling, hard-hitting statement game from UT's improving defense kept the Trojans stymied in their tracks after some early success.

“You always need, you know, when you’ve been up and down and you’ve been so close for the last year and three games in these types of games to go out and win in a complete fashion the way that we did,” Herman said. "It certainly adds to our level of confidence, and I hope that it propels them into this week’s preparation knowing what they are capable of.”

The stand that propped up a win

In the second quarter Texas held a narrow 14-13 lead. USC’s freshman quarterback JT Daniels and fellow freshman Amon-Ra St. Brown connected on a 41-yard pass that allowed the Trojans to move back into the red zone and threaten to take the lead. The Horns held tough.

Then, on fourth down from the 1-yard line, Carr tried to go wide right on the ground but Brandon Jones kept him from turning the corner, stuffed the run and the turned the ball over on downs with a stirring goal-line stand.

“That was a huge momentum builder to keep them out of the end zone there,” Texas defensive end Charles Omenihu said. “We bowed our necks, bit down a little harder on our mouth guards and were determined to keep them from scoring.”

In his second start against USC in two years, Ehlinger passed for 223 yards and two touchdowns and ran for 35 yards and another score. All of his scoring plays came during the second and third quarters when the Longhorns (2-1) rang up 34 unanswered points to erase an early deficit and take the game away from USC.

Ehlinger hit on 15 of his 33 throws without an interception and did more than enough damage with his legs as well, using his knack escaping danger to pick up big first downs of five different occasions.

“Sam played really well,” Herman said. “He made plays with his legs, he converted third downs. He made some bigtime throws and stood in there when he needed to and stuck to the game plan.”

Leading 16-14 at halftime, the Longhorns took hold of the game in front of a rocking sellout crowd after the break.

A 27-yard Ehlinger-to-Joshua Moore scoring strike on the Longhorns’ opening drive of the second half pushed Texas’ advantage to 23-14. The drive was helped by roughing the passer penalty by the Trojans’ Porter Gustin that was ruled to be a targeting foul, meaning Gustin — one of USC’s captains and best players — was ejected from the game, and big blow for the Trojans’ defense.

Intruding into USC's backfield, freshman Caden Sterns blocked a 50-yard field goal attempt by the Trojans’ Chase McGrath in the second half. The bouncing ball was scooped up by Texas’ Anthony Wheeler and returned 46 yards for a touchdown, giving Texas a 30-14 lead and sending the partisan crowd into a frenzy.

Another stop, and the offense was chugging along again. Ehlinger rambled 4 yards for a touchdown at the end of eight-play, 50-yard drive with 1:42 to play in the third quarter to build Texas’ advantage to 37-14.

Daniels passed for 322 yards without a touchdown and was intercepted once but was constantly harassed by the Texas rush and sacked three times.

The Trojans gained minus-5 yards on 16 carries on the ground. That total ranks 24th all-time for Texas and is the fewest since it allowed minus-14 yards rushing against Texas Tech in 2014.

“Every week our game plan is to stop the run and make them throw, especially with a freshman quarterback,” Herman said. “We did enough. We kept the ball in front of us for the most part.”

Texas had a total of 10 tackles for loss in its first two games of the year, but doubled that number and a little more against USC. Linebacker Gary Johnson maneuvered his way toward six tackles — four of those for a loss — along with a forced fumble and a sack.

Finding footing in the first half

The Trojans moved 75 yards in nine plays on their opening drive to Stephen Carr’s 23-yard touchdown run and a 7-0 lead. Carr ran into the middle of the Texas defense and popped free after biding his time along the line, and there was no second or third level of defense to stop the score.

Texas responded with a nice drive of its own, moving using 12 plays to move to the USC 3-yard line before stalling and settling for a 20-yard field goal by freshman phenom kicker Cameron Dicker.

USC added a touchdown before the end of the quarter, marching from 53 yards on eight snaps to Vavae Malepeai’s 3-yard scoring run around left end on third down to push its advantage to 14-3. The big play on the drive was a 40-yard pass from Daniels to Velus Jones to set the table for the touchdown.

A pass from Ehlinger that Lil’Jordan Humphrey turned into a highlight-reel 47-yard touchdown brought the Longhorns back to within 14-10 at the 13:23 mark of the second quarter. Humphrey caught the 10-yard pass and spun 180 degrees to avoid a Trojan defender before sprinting to the end zone, giving Texas a big boost.

A Kris Boyd interception and a nifty throwback pass from Jerrod Heard to Ehlinger set the table for a 46-yard field goal by Dicker that cut the USC lead to 14-13 with 10:39 to play in the second quarter.

Texas cashed in on a 13-yard punt by the Trojans’ Chris Tilbey to drive 22 yards in nine plays to Dicker’s third field goal of the half (and his career), again from 46 yards away to allow the Longhorns a 16-14 lead at halftime. 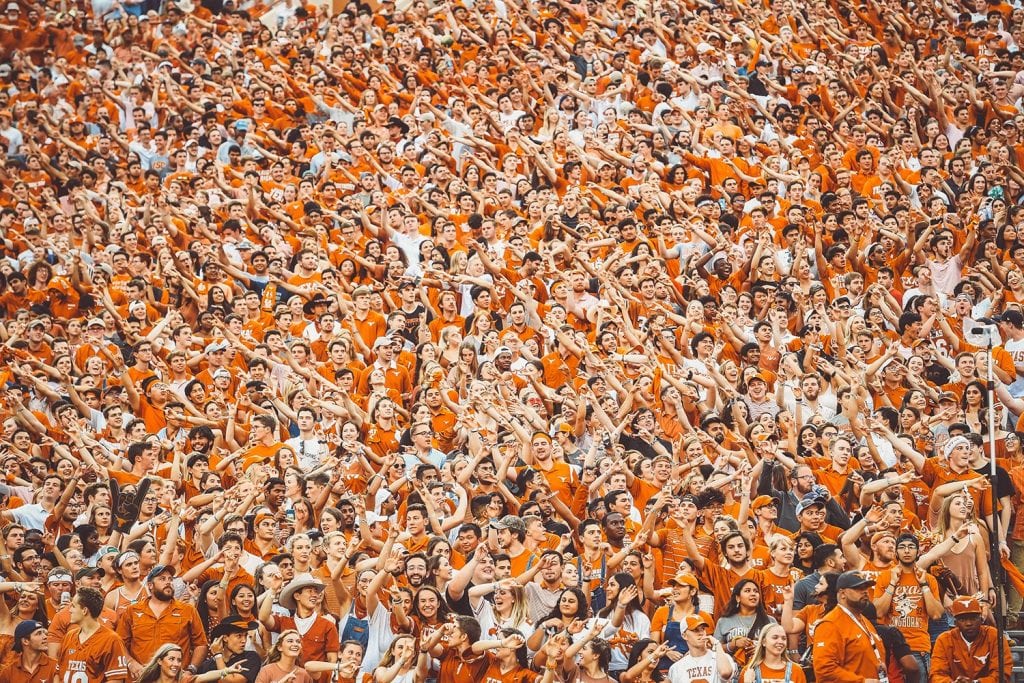