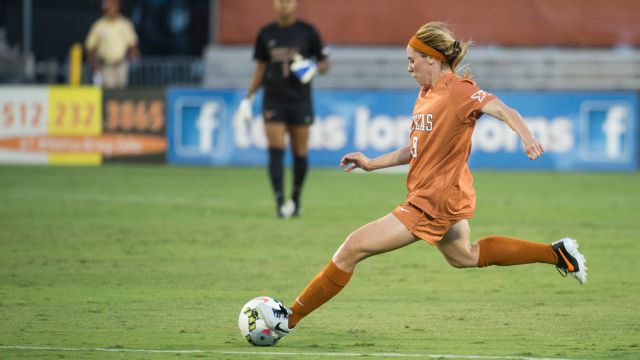 The West Virginia mountaineers maintained possession consistently during the first half of the match. Head Coach Angela Kelly is familiar with West Virginia. Kelly formally coached West Virginia’s goalkeeper, Hannah Steadman when she was a freshman during Kelly’s final soccer season at Tennessee in 2011.

“West Virginia is a high quality team, said Kelly.  “You’re not going to get many gifts {from West Virginia.] It’s a battle.”

Ten shots were made by West Virginia over Texas in the first half of the match. Texas made one shot attempt during the first half.

When the second half started, Texas became more aggressive with their possession of the ball. West Virginia put the pressure on the longhorns to keep their momentum constant.

In the 61st minute West Virginia midfielder, Cari Price assisted teammate, Ashley Lawrence for the second goal of the game.

Kelly always sees improvements her team can make after a win or a loss of a game.

“We need to be more eager to receive the ball, said Kelly. “In the second half we were more willing to play make,” Kelly reflects.

As Kelly and her team regroup and prepare for their next Big 12 Conference match against the Iowa State cyclones, she stresses the importance of being present at every game.

“We understand you don’t get to pick and choose when you show up. You show up every game,” said Kelly.

On Fri. Oct. 3 Texas will travel to Ames, Iowa to play Iowa State University at 7 p.m.