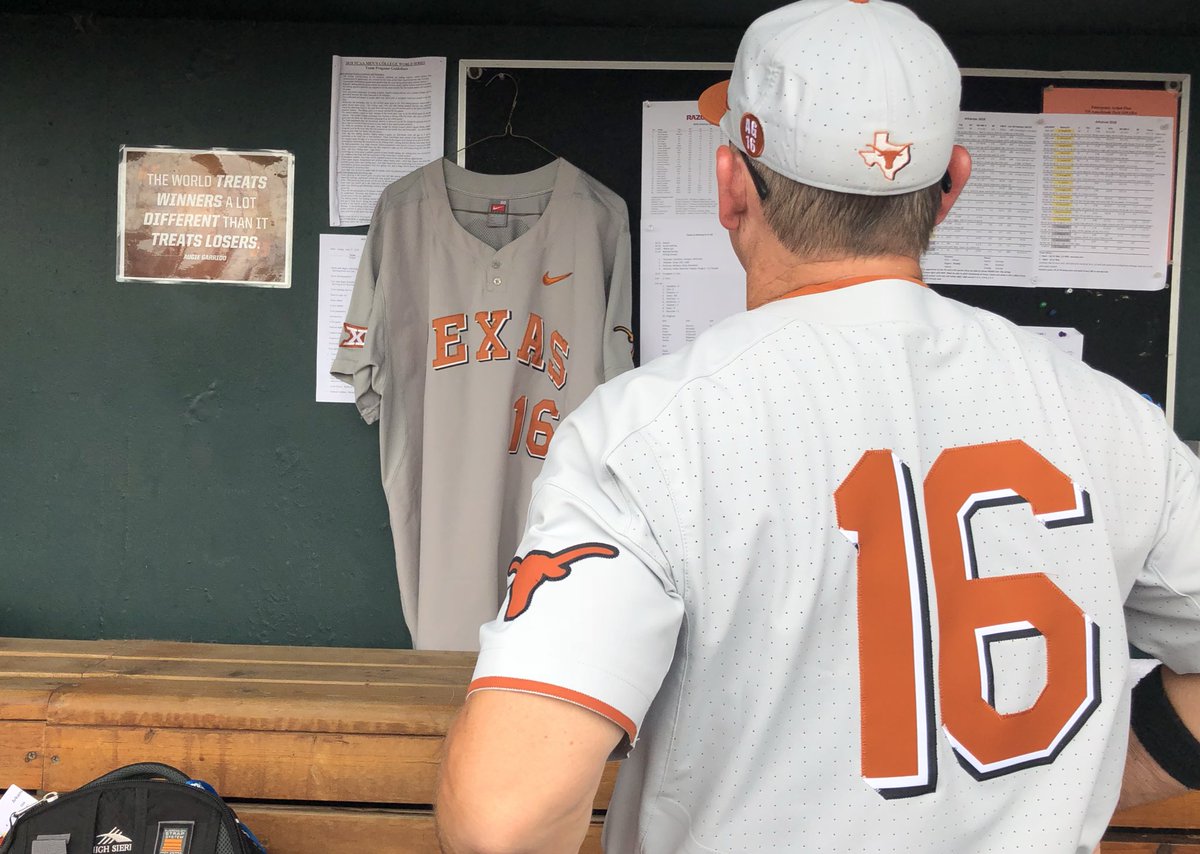 OMAHA, Neb. — The inspiration came in May during the Big 12 Tournament in Oklahoma City.

The Longhorns lost both of their games in the tournament, then rallied to upend Tennessee Tech in the Super Regionals and reach Omaha. Now Pierce and the Longhorns want to make sure they have Garrido in the forefront of their minds and dugout, as they have done all season.

So, Pierce put away his No. 22 Texas uniform and slipped on the iconic No. 16 Sunday in Omaha.

“He's a huge piece of this team, and so I talked to the players about it early on, early in the week,” Pierce said, “and basically said the story about how it happened with Woody Woodman and Augie wore his No. 2 jersey. Vinny (Alcazar, the Longhorns’ equipment manager) and I were sitting in the clubhouse in Oklahoma City, and I said, ‘Vinny, if we make it to Omaha I want to wear No. 16.'

“He said that would be really cool. So he started working on it. He got the jerseys together. Once we clinched the Super Regional, I walked into my office and Vinny was sitting there holding them. It was a good moment. I was able to tell the players about it.”

That’s when the moment, the memories and the (the Longhorns and their fans hope) magic jersey made their appearance. Pierce knew that no matter what challenges his players faced this week, they would be even-keel and ready to reel off some wins in pursuit of becoming a champion.

“What I was impressed with was, there wasn't any fist pumps, nor anyone rolling their eyes," Pierce said. "It was basically the same way we've approached it from day one, and understanding that he's a piece of us. And I know Augie would not want to be the center of attention, and I think he would probably appreciate the way we handled it.”

Garrido’s jersey has hung in the Texas dugout for each game since his tragic passing in March, and Pierce said he rubbed the No. 16 uniform for luck as Texas came back to topple Tennessee Tech in three games.

Following a loss this season, the Texas baseball team is 11-8, with only five instances of losing consecutive games. Of the prior 21 losses (UT's record is now 42-22), the Longhorns lost two subsequent games four times. Texas rebounded to win 10 times following a loss, and now takes on No. 1 overall seed and defending champion Florida. However,  only once in the current format’s history of the College World Series — 1999 — has the top overall seed gone on to claim the trophy.

Away from UFCU Disch-Falk Field this season, Texas is 9-11 and now sports a 1-3 record at neutral sites (such as Omaha), for an 10-14 overall record away from Austin. While the Longhorns' pitching staff has looked more stout of late, the team sports a 6.40 ERA away from the comforts of Disch-Falk.

The game against defending national champion Florida will be at 1 p.m. Tuesday. After the loss to Arkansas, which started in the daytime despite ending in the evening because of a weather delay, Texas is now just 18-14 in day games, yet a sterling 25-8 in night games.

All of this adds up to one thing: stay tuned for what is sure to be a riveting elimination game between Texas and Florida at 1 p.m. Tuesday.