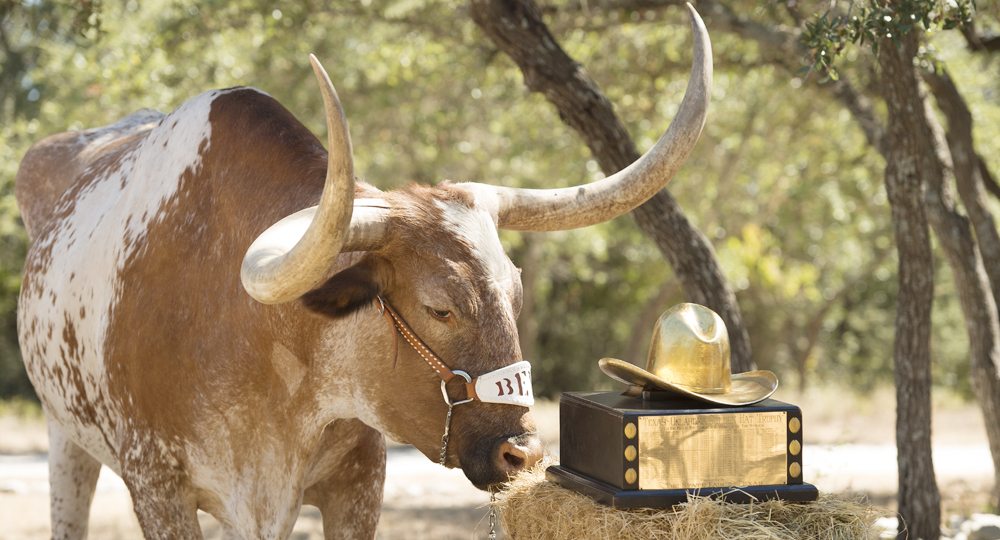 Although he was not in attendance, the last game of Bevo XIV's tenure as UT's mascot was a victory over the rival Oklahoma Sooners (photo courtesy of texassports.com).

After being diagnosed with bovine leukemia virus, University of Texas mascot Bevo XIV is being retired, effective immediately, the university announced.

Multiple veterinarians confirmed last week’s initial diagnosis, which had prevented the mascot from making the trip to Dallas for the annual showdown against Oklahoma. Bevo XIV will continue to live on the ranch owned by John T. and Better Baker, the owners and caretakers of both Bevo XIV and his predecessor, Bevo XIII.

“Bevo XIV is a special animal,” Silver Spurs executive director and Bevo XIV’s regular travelling partner Ricky Brennes said. “He truly embraced his role and loved engaging with people at games and special events, and at his ranch — where he will continue to live — he was clearly the leader of the herd.“

The search for Bevo XIV’s successor will begin immediately, and will be led by the Silver Spurs Alumni Association. No timeframe for finding and training a replacement has been established, but it is hoped that a replacement will be ready to assume the rule in time for the 2016 season, which will include a Thanksgiving game that will mark the 100th anniversary of Bevo’s first appearance at a Texas football game.

While known best for his presence at UT football games, Bevo XIV also made numerous appearances at special events, including the second inauguration of President George W. Bush.

“Bevo XIV has served as part of a great tradition, and was a rallying point for Longhorns fans,” UT president Gregory L. Fenves said. “We all have warm memories of him as he heads in to retirement.”

The funds needed to cover Bevo’s support and care are provided by the Silver Spurs Bevo Endowment, which also funds scholarships for UT students and provides financial support for the primary charity of the Silver Spurs, the Neighborhood Longhorns Program.