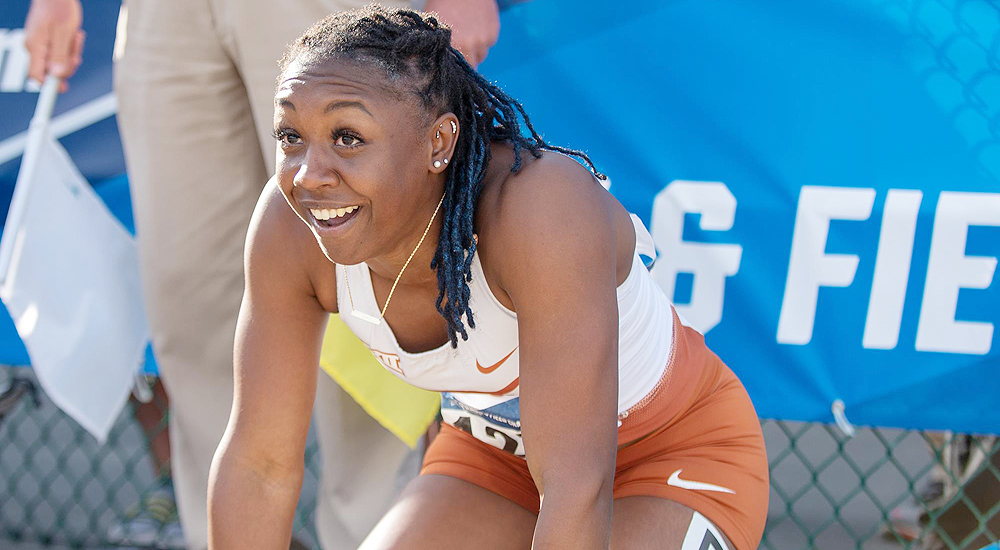 Teahna Daniels now owns two of the top 10 times in UT history in both the 100 meters and the 200 meters is one of just two runners in the history of Texas women's track and field to reach the NCAA Championship final in both events (photo courtesy of texassports.com).

AUSTIN, Texas — The 4x100-meter relay team of Kennedy Simon, Teahna Daniels, Zola Golden and Kynnedy Flannel crossed the finish line in 42.84 seconds to finish second in its heat and advance to the final of the event at the NCAA Track & Field Championships at UT’s Mike A. Myers Stadium.

The time was the second-fastest time in program history, and the fastest by a Texas foursome in 14 years, falling just .08 seconds short of the 22-year-old UT record of 42.76, which has stood since 1998.

Daniels also stood out on her own, blazing into her third NCAA Championship final in about three hours: she started the day as a member of the 4x100-meter relay and then ran an 11.05 — the third-fastest time in the meet and the eighth-fastest in UT history — in the 100 meters to reach Saturday’s final. She then capped off her day by reaching the final in the 200 meters when she clocked a 22.65 in her heat, the 10th-fastest time in program history. She has two of the top 10 times in school history in both the 100 and the 200, and is one of just two Longhorns (joining Morolake Akinosun) to reach the NCAA Championship final in both events.

Saturday will be a big day for several Longhorns, including UT’s Ashtin Zamzow, the top-ranked heptathlete in the country and the school record holder in the event who will begin the first day of her pursuit of an NCAA title in the event Saturday.