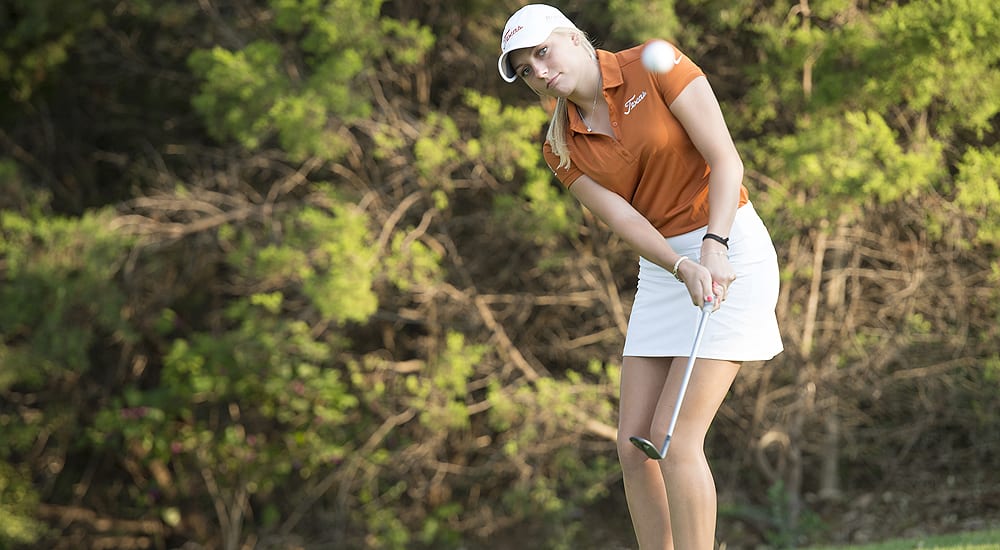 Greta Voelker and the Texas women's golf team are among five programs ranked among Golfweek's top 25 that will compete in this weekend's Betsy Rawls Invitational at the University of Texas Golf Club (photo courtesy of texassports.com).

Joining the Longhorns as headliners in the tournament will be No. 3 Alabama, No. 4 Florida, No. 15 Kent State and No. 23 Baylor (rankings are from Golfweek magazine’s Oct. 12 ranking). Also in the field are Colorado, SMU, New Mexico, North Texas, Texas A&M, Texas State, Texas Tech and Tulane.

Texas head coach Ryan Murphy said his team should get a good barometer of where it stands because of the strength of the field.

“It’s strong,” Murphy said of the field in the tournament. “Several good teams coming in: Alabama, who I think is the No. 1 team in the country currently, just based on a couple of events that we’ve played. Florida’s coming, Kent State is a really good team.”

To say the Betsy Rawls Invitational has been good to the Longhorns would be an understatement — UT has won the event eight times before, including last year.

“You always want to represent on your home golf course, certainly, at your home event, and your goal is always to win,” Murphy said. “We’ll go through our routines, our rituals that we always do, with the end goal being to win the golf tournament. I wouldn’t say it’s necessarily a lot different from other tournaments. You’re just trying to win a golf tournament.

“This one happens to be our own, happens to be amongst a good field. A lot of our families and parents will be in, so there’s a desire to play well in front of your people. It’s nice if you can get that win, but it’s just another tournament for us, where we’re just trying to position ourselves and control the things we can control to give ourselves that chance.”