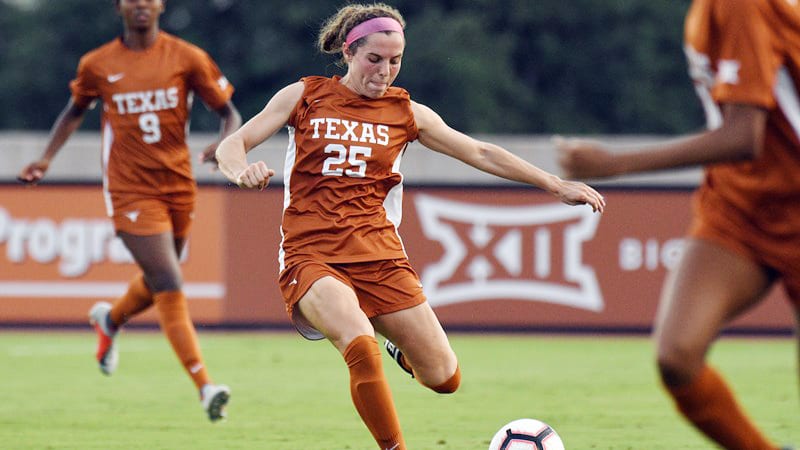 Katie Glenn and the Texas soccer team will face Kansas Sunday in the first round of the Big 12 Championship (photo courtesy of texassports.com).

LUBBOCK, Texas — The No. 17 Texas soccer team will face Kansas Sunday in the first round of the Big 12 Championship at the Swope Soccer Village in Kansas City after losing, 1-0, Thursday to Texas Tech in the regular-season finale for both teams.

Texas goalkeeper Nicole Curry made five saves, but could not keep Texas Tech forward Kirsten Davis from scoring her fifth goal of the season in the 87th minute, a tally that turned out to be the game-winner.

Sunday’s matchup against the Jayhawks will UT’s second in 10 days; Texas blanked Kansas, 2-0, Oct. 19 in Austin.

Baylor is the tournament’s top seed, followed by No. 2 West Virginia.

With the loss Thursday, Texas falls to 13-3-2 overall, and 5-3-1 in games against Big 12 teams, while Texas Tech, the tournament’s fifth seed, improves to 13-4-1 overall and 5-3-1 in conference games, and will face fourth-seeded TCU in the first round of the Big 12 Championship.

Texas was outshot Thursday, 15-11. More importantly, Tech enjoyed a 7-2 edge in shots on goal. Defenders Chelsea Surpis and Emily Strouphauer were the only Longhorns to muster a shot on goal.

When the Longhorns and Jayhawks met Oct. 19, Texas got goals from Kayra Dollas and Haley Berg en route to the 2-0 victory.