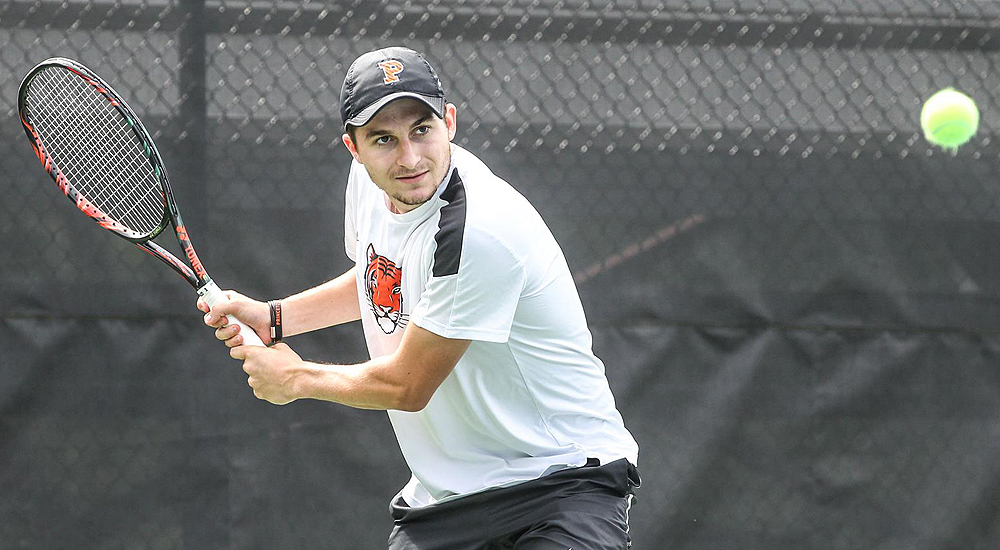 After two top players declined an extra year of eligibility granted by the NCAA, Payton Holden will join the Texas men's tennis team as a graduate transfer from Princeton (photo courtesy of goprincetontigers.com).

After the departures of seniors Christian Sigsguaard and Yuya Ito, who opted to skip their extra years of eligibility granted to athletes whose teams compete in the spring because of the coronavirus pandemic, the Horns did not have a single senior heading into next season.

That changed June 22 when Texas announced the addition of Austin native Payton Holden as a graduate transfer after spending the past four years competing in the Ivy League for the Princeton Tigers. On the court, he helped the Tigers finish the season ranked No. 24 in the final Intercollegiate Tennis Association (ITA) rankings that were released Feb. 27. He found success in the classroom, graduating in May with a degree in Economics.

"During his four years at Princeton, Payton excelled both in the classroom and on the court, distinguishing himself as one of the better doubles players in the country," Berque said. "His coaches at Princeton speak glowingly of his leadership, and we are thrilled that he will bring his skills and experience back to Austin for his final year of college tennis, and to pursue a master's degree in accounting at the McCombs School of Business. We can't wait to get started with Payton and the rest of the team in August."

Attending the Austin Tennis Academy, Holden developed into a dominant player from a young age, which showed in his results. While competing in the U12, U14, U16 and U18 age groups, Holden was the No. 1 player in Texas, and his prep career was highlighted with a Junior Team national championship victory.

Holden and his Princeton doubles partner, Ryan Seggerman, were ranked by the ITA in doubles throughout the 2019 season, including six weeks ranked among the top 10 pairs in the country; they climbed as high as No. 6 and finished ranked No. 16. He led the Tigers in doubles victories, going 26-8, including a 15-3 mark in dual matches and victories over six ranked doubles pairs. He also went 404 in singles, with an unblemished 4-0 mark in dual matches.

The Ivy League was one of the few conferences who refused to honor the NCAA's extra year of eligibility given to all spring sport athletes to make up for the loss of the 2020 season.